Breaking: Our grasp on reality after Villa beat Liverpool

Aston Villa currently sit in 2nd in the Premier League after beating Liverpool this weekend. Maybe it's time we start accepting a new normal.

Share All sharing options for: Breaking: Our grasp on reality after Villa beat Liverpool

First, let's look at a picture: 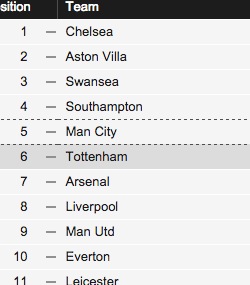 That's the Premier League table as of Sunday evening. Hull and West Ham have yet to play their fourth match, but nothing they do can change the top three:

Despite the fact that what you see there makes it seem as if we're in a Salvador Dalí painting, your eyes are not fooling you. Aston Villa are in the top three in the Premier League. In fact, they are in the top two. After four matches, including a visit to Anfield, Aston Villa are currently sitting second, and are one of only three unbeaten teams. They trail Chelsea by two points for the Premier League lead. They do so after beating Liverpool in a match in which Nathan freaking Baker was possibly the best player on the pitch. The world is cracking at the edges, and it's Aston Villa's fault.

So I guess it's time to come to terms with a few things. Aston Villa aren't supposed to be doing this. They're winning largely on the strength of an incredible defense and an offense who don't do much but who have converted 67% of their shots on target into goals.

This is an Aston Villa are doing something we haven't seen a lot of in the past few years: playing smart football. Paul Lambert seems to realize that without Christian Benteke this is not a club who will score a ton, so he's structured it tactically to take advantage of a newly stout defense and a restructured midfield. All of the moves this summer were, it is now obvious to see, geared towards making Aston Villa a team who could successfully play the types of matches this season that they tried to play last season.

Is second place sustainable? Probably not. With Arsenal, Chelsea, Manchester City, Everton, and Tottenham as five of the next six matches, odds are that Villa will tumble a bit. But even if Villa lose out in that stretch - a prospect that seems less and less likely - they'd still be sitting at 10 points in 10 matches, exactly on pace with last season (in fact, 2 points ahead of last season's corresponding fixtures) with one of the easiest stretches of fixtures in the Premier League this season coming up.

And if they do anything else? Imagine coming out of this terrifying bit of schedule at 15 points. 15 through the first 10, and all it would take would be a win and two draws in six matches. That doesn't seem as absurd now as it did at this point last week.

This isn't a team who should reach Europe this year, but it's also a team that should be able to stay well above the relegation fray. I've been trying to not buy in. I know sport. I know heartbreak. Villa surely have to break, right? But we've had four matches, and what we have seen has been consistent. There really hasn't been a fluke in the bunch, and it's starting to seem as if this is really the Aston Villa team we have for the season. Maybe it's time we start getting used to the new normal.