A sensible formation that could work wonders for Villa

No, 4-4-2 isn't particularly inspired. But it could be a great formation for Aston Villa.

Share All sharing options for: A sensible formation that could work wonders for Villa

Yesterday we took a look at the 4-3-2-1 formation that might get Jack Grealish involved a little more in Aston Villa's plan. Today let's consider an option that does the same but gives him another target. 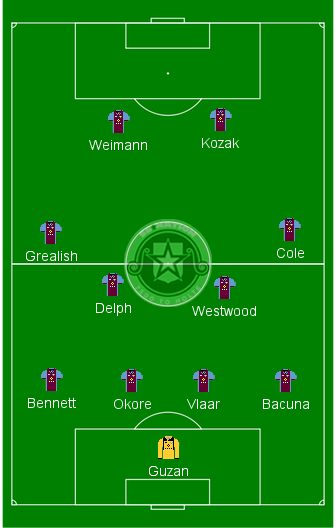 Yes, I know. The idea of a 4-4-2 isn't all that inspiring. But it could actually be a fairly useful formation for Aston Villa this year. There's the four at the back who were effective last season (especially when Ron Vlaar was incorporated) but immediately ahead of it we add some width to a midfield that suffered from chronic narrowness.

It also means that Paul Lambert can rotate through some of his midfielders. Fabian Delph would likely start always, but Ashley Westwood and Karim El Ahmadi could rotate out of the other central slot. But where I really like this is on the outside. If Joe Cole can stay healthy (a big if) then he and Jack Grealish could do wonders in both maintaining possession and providing creativity. As commenter The Fifth Fuller pointed out, Leandro Bacuna could easily slot into the Cole spot in case of injury (and Matthew Lowton into the RB spot).

It also has the advantage of getting two strikers (and I fear that I'm repeating myself here) actually playing striker. Andi Weimann has shown that he can be useful when he doesn't have to worry about playing on the wing. And Darren Bent - assist on Wednesday night aside - can literally do almost nothing but strike. Libor Kozak works much the same way.

A 4-4-2 will never make anyone sit up with great interest, but given the personnel that Villa have, it could be very effective this year.

Pros: lets strikers play as strikers; solves some of the problems of midfield width; works well with the players on hand.

Cons: A little boring/predictable; if wings aren't creating could be useless; relies on the four-at-the-back that had a tendency to fail at just the wrong moment last season.