Earlier today I wrote that it seems very likely that Aston Villa will again return to the 4-3-3 formation they utilized so often last season. The idea is frankly uninspiring. But with a quick tweak, it could turn into something that could be very interesting to watch Villa play this year. 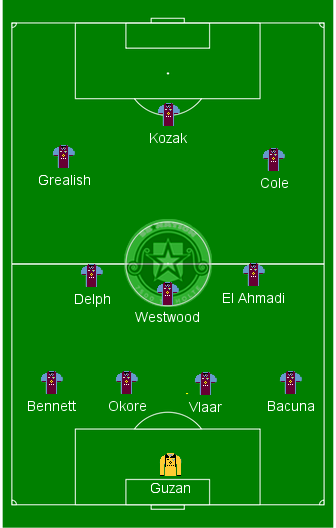 The 4-3-3 we talked about earlier (with a flat front three) is what we saw Villa play a lot last season. This set up, with the two outside forwards withdrawn as wingers, is what I imagine Paul Lambert wanted to see his team play. So why advocate for it now when we watched it fail so miserably last season? Because we've now got some actual wingers for both sides of the pitch.

The big failing last year came when strikers (such as Andi Weimann and Gabby Agbonlahor) were asked to play as wingers, which they quite clearly weren't very good at. It resulted in a lack of balls being fed into the box and two players not getting to do what they're good at. Effectively it took two players and made them worse while also sacrificing two positions. That's bad!

But with Joe Cole added to the fold, we've got a player who could effectively play in the right wing role. That would pair quite well with Jack Grealish over on the left. Grealish is far from a finished product, but he'll certainly be better as a winger than either of Agbonlahor and Weimann. The times when the 4-3-3 seemed to have a bit of life last season were when Marc Albrighton was feeding a steady stream of crosses into the box. The problem was that he didn't have a counterpart on the other side of the pitch. Now we've got players for both roles.

Given the depth issues at the winger slots, I wouldn't expect this to be a formation Villa use for every match, or even for full matches. A need to substitute either of the wingers leaves Villa with no one for that spot. But it could certainly be a nice change of pace for the club. It's not wildly different from the 4-3-3 they know, but it's different in ways that could make improvement a very real possibility.

Pros: Close enough to the known 4-3-3 that players should be able to adapt easily; provides a great chance to use the talented wingers Villa now have; attacking possibilities without exposing the defense

Cons: Not enough depth to really cover the wingers well; relies on performances from Grealish and Cole that we may not be able to expect yet/ever