The formation we're most likely to see Villa play this year

The third in our look at possible Aston Villa formations brings us to an old friend: the 4-3-3.

Share All sharing options for: The formation we're most likely to see Villa play this year

If last season is anything to go by, the three center back formations we've talked about in the past two days could be pushed aside for something entirely more... predictable. Ladies and gentlemen, I present the: 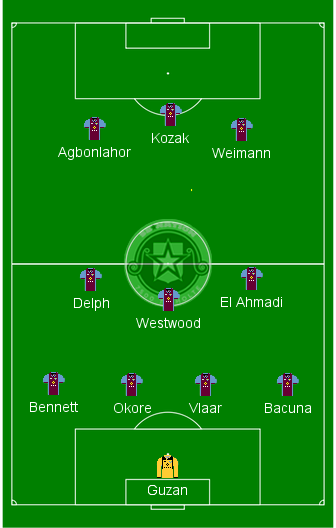 Ugh. I'm bored just looking at it. So many matches watching this thing fail horribly meant that I have a sort of rapid-twitch impulse to hate it.

But if Villa were to play the 4-3-3 this season, there is reason to think that it could be more successful than it was last year. Leandro Bacuna has a full season under his belt, and was looking better in the defensive phase of the game in the second half of last season. And with Jores Okore back healthy, even a Ron Vlaar injury won't mean a centre back pairing devoid of a first-choice player. Immediately this looks better for having one of Vlaar/Okore always in it (and preferably both). In the middle and up front, it's the same thing we saw last year. Of course Kieran Richardson and Joe Cole (not to mention Gary Gardner and Charles N'Zogbia) could add a little bit of flavor here, but given the way that Paul Lambert deployed this last season, they'd likely be wasted.

And don't go jumping the gun and say that we could replace the two outside forwards with real wingers. We're getting to that tomorrow! For now, the 4-3-3 has to be in our discussion because of how much Paul Lambert seems to love it. For that reason, it very well may be the formation we're most likely to see this year. It won't be inspiring, but it should certainly be better than last season's version. And that's something, I guess.

Pros: Players are familiar with it; could prove good defensively if the Vlaar/Okore pairing can take control

Cons: So boring; leaves strikers trying to create up top (which they are not good at); not much width; very reliant on wing backs playing both phases of the game well