Villa can play three at the back without sacrificing the front

We continue our look at possible formations for Aston Villa's upcoming season.

Share All sharing options for: Villa can play three at the back without sacrificing the front

Yesterday we began our examination of potential formations for the Aston Villa season by looking at the 3-5-2. There has been a lot of talk that the club are in a position to play three central defenders this season and the 3-5-2 is probably the formation that immediately jumps to mind for a lot of people. But a small tweak in that could reap a lot of rewards in terms of creativity, which brings us to today's formation: 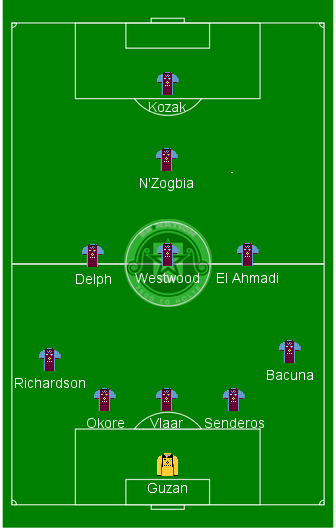 You'll notice that the back end of this situation looks a lot like what we talked about yesterday. Again we have Leandro Bacuna and Kieran Richardson doing what they can to get forward. In the back three, Ron Vlaar and Jores Okore seem like locks, and if they can play as well as we're expecting, the third defender would actually be free to rotate among Philippe Senderos, Nathan Baker, and Ciaran Clark. Having Vlaar and Okore limits the liability of defensive gaffes from any of the above, and in such a setup I think I'd actually love to see Nathan Baker. But I've penciled in Senderos here since he's a new toy and Paul Lambert is likely to use him a lot.

I noted yesterday that one of the problems with the 3-5-2 was the fact that if the wing-backs couldn't get up the pitch the strikers would be left largely high and dry. By withdrawing one of those strikers for an attacking midfielder, it gives the team more creative options than just bombing up the flanks from the back. Charles N'Zogbia or Joe Cole are well-suited for the attacking midfield role (though it would be wonderful to see the club get someone more compelling for the spot).

By having that position utilized it means that the lone striker up top could be looking for service from both sides as well as up the middle, and it decreases the chances of seeing all creativity dry up. Of course it has the downside of leaving only one true target person for all of the creativity to flow to, and thus shutting down the striker could be potentially easy. However, Libor Kozak is made for just this type of play. Give him the ball with not much space to work with, and he'll usually do something half-decent. He's not a world-beater, but this type of a system would play to his strengths.

Pros: More options than the 3-5-2; allows a target man to really fulfill that potential; could also be a stout defense; the counter attack could be quite strong

Cons: If wing-backs get caught too high the defense could be exploited up the sides; Villa don't have a truly great attacking midfielder available; limits options once the ball gets into the final third