Could a switch to 3-5-2 be Villa's key to success this year?

Aston Villa have a number of choices in formation for the coming season. Today we look at one way they could play three centre-backs, as many have suggested.

Share All sharing options for: Could a switch to 3-5-2 be Villa's key to success this year?

Thanks to the moves they have made over the course of the summer, there has been increasing speculation that Aston Villa will feature a three-centre-back formation for the 2014-15 season. And, given what we know, that actually makes a lot of sense. But it's not the only option available to the club.

Given the current depth chart, I sat down to figure out what formations we might see Aston Villa use this season. I came up with five possibilities, which I'll be publishing over the next five days. There are, of course, endless variations to these, but they are the five that I can see being most effective for Villa this season.

I've put in players to give some idea of my thought process, but there is no real reason that it should be Kozak instead of Bent, or anything similar. Think big picture as you're looking at these. Let's dive in! 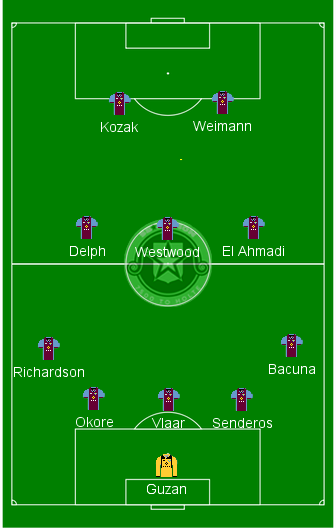 When people have talked about the three-centre-back formation, this has sort of been what I've seen in my head every time. And really, it's sort of interesting to think about. There is a natural worry that five defenders would lead to an overly negative performance like we saw a few times last season, but if Bacuna and whoever is at left back (Richardson strikes me better in this type of situation) are allowed to push forward a lot, it could be fun to watch.

The key here is acknowledging the fact that neither of the wing backs could be expected to contribute much to the defensive side of the game (and that, if they were, we'd see some awfully boring football). Instead, both would have to act in a more offensive manner. You could almost call this a 3-5-2 depending on how far up the two are allowed to play. Otherwise it's probably a 5-3-2. Six of one, half a dozen of the other.

The middle of the pitch would work in much the same way the it did during last season's 4-3-3 days while the presence of outside play from Bacuna/Richardson would mean that the strikers could actually play as strikers. And that's a good thing, given that Andi Weimann, Libor Kozak, Darren Bent, and (to a lesser extent) Gabby Agbonlahor work best when they don't have to create their own chances and can be simply allowed to find the back of the net.

Pros: Acknowledges the strengths of Leandro Bacuna and Kieran Richardson while still letting Paul Lambert use them as defenders; lets strikers be strikers; could potentially be very stout defensively

Cons: If the wing backs can't get up the pitch, it would be quite narrow; has potential to slip into insipid bus-parking; a bad day means that the strikers don't have service (and we all know how that looks).

Do you think the 5-3-2 could work for Villa? Would you make any changes to the personnel here? Let us know!