In 1982, a club from Birmingham, England called Aston Villa captured the hearts and minds of European football fans by winning the European Cup. Since then things haven’t quite gone so smoothly for the former kings of Europe. The 2014-15 season sees a club up against it. A desperate owner looking to sell. A manager without a budget. I think it’ll play out something like this. 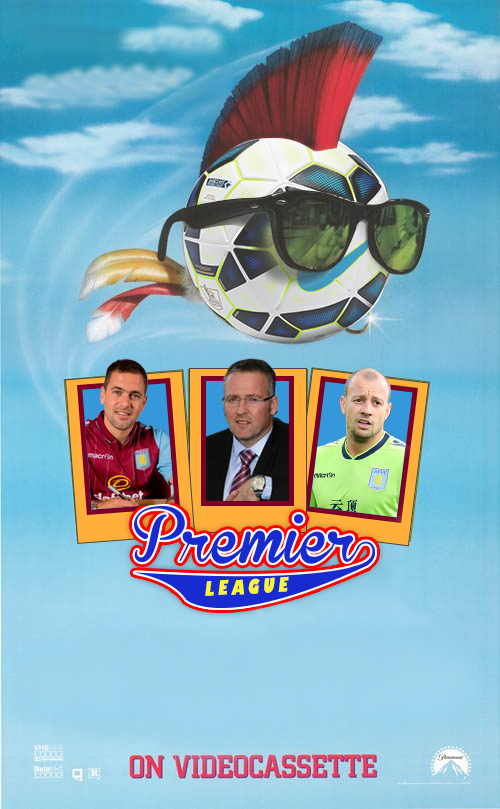 LAMBERT
I've identified a few players we can bring in without a fee as per your wishes. COLE, SENDEROS, RICHARDSON - they're all available. The only problem is they're old and bad.

LERNER
I think they'll fit right in with our team concept

LAMBERT
That reminds me...what is our team concept?

PAUL LAMBERT and ROY KEANE are observing a practice

LAMBERT
That's our best youngster JACK GREALISH. We've got high hopes for him.

JACK GREALISH is seen dribbling around pylons with relative ease

LAMBERT
That's JORES OKORE our young, promising center back. He's coming off an injury but we think he could be special.

LAMBERT
That would be ALAN HUTTON

ALAN HUTTON is sitting with crossed legs, nude eating a pile of discarded banana peels at the center of the pitch

PAUL LAMBERT gazes into the distance and the camera pans in on new signing and supposed washed up veteran JOE COLE tirelessly working on his free kicks.

WOODWARD
So you sit here as the new man at Aston Villa how do you feel?

RICHARDSON
It's great. It's a massive club with great facilities.

WOODWARD
And do you think the club can push on and have a successful campaign?

RICHARDSON
It's a massive club with great facilities.

LERNER
The plan to sell the club is working brilliantly. No one suspects that my long con of making sure Aston Villa get relegated for good is in its final stages.

LERNER
Without a budget and the injury to Christian Benteke, Lambert will most certainly fail to survive and finally Villa will be sunk.

RANDY LERNER hangs up and begins to cackle like a maniac having just sold Ron Vlaar to rivals West Bromwich Albion. He lights a cigar with a flaming wad of ACORNS kits

MANCHESTER UNITED has just stormed back from being down 2-0 to win the match on a stoppage time goal from JAVIER HERNANDEZ.

LAMBERT
We played well. We will keep our heads up and be ready to give it a right go on Boxing Day.

That night LAMBERT and KEANE go out and binge drink and try to figure out a way to keep Villa safe despite the lack of resources and empty transfer fund. Aston Villa are firmly entrenched in the drop zone.

LAMBERT
I've got an idea that'll pick up the lads. I'll have it ready for the next match.

KEANE
OI
(he smashes
a pint glass on
his own forehead)

PAUL LAMBERT addresses his team before the match.

LAMBERT
Can I have your attention please? I think you all ought to know that MR. LERNER doesn't think too highly of our worth. He put this team together because he thought we'd be bad enough to finish dead last, knocking down attendance and merchandise sales to the point where we'd be relegated. It turns out he's a rabid Birmingham City fan and the joke has been on us the entire time.

BRAD GUZAN
What if we don't get relegated?

LAMBERT
He will release you and find players that will get us relegated. Now...

LAMBERT pulls out a cardboard cutout of RANDY LERNER in a very expensive looking suit with a dialogue bubble that reads: U BLOKES R BLOODY RUBBISH

LAMBERT
Now, every time we get a point we peel off a section.

GUZAN
Wait, why is LERNER speaking with an English accent?

EXT. FINAL DAY OF THE SEASON, VILLA PARK VS BURNLEY

Tied at 1 goal apiece, ASTON VILLA need all three points to survive. Anything less will see them relegated.

In the 93rd minute, JOE COLE wins a free kick from 25 yards out and it seems like it will be the final kick of the season. ALAN HUTTON, who has been forced into the first team because of injuries and unconscionable transfer decisions by RANDY LERNER approaches JOE COLE and OTHERS.

COLE
Alright fellas, I'm going to take this one.

HUTTON
Apologies mate, I was eating a bug. There's only one thing left to do.

HUTTON
(begins looking for
more bugs to eat
in the grass)

JOE COLE shrugs. He lines up for the free kick and drills home a dramatic winner that keeps ASTON VILLA up for another season.

In the ASTON VILLA press box RANDY LERNER in his only appearance at VILLA PARK is apoplectic. He staggers backward as the crowd rush the pitch and tumbles ass over tea kettle into a before unseen giant cart full of horse manure.

Next Up In Soccer