It's been a while since we've had a good Aston Villa transfer rumour. That streak continues, but enjoy this Philippe Senderos one in the meantime.

Share All sharing options for: Return to Senderos: Uninspiring rumour for uninspiring club

Well, you know the old saying: If Joleon Lescott seems a touch too ambitious for your club, there's always Philippe Senderos. Or at least that's how I think it goes. I'd look it up in my book of non-existant idiomatic phrases, but the rumour that Villa are actually considering signing Senderos (bottom of that story) has filled me with so much ennui that I can't be bothered. The injury-prone central defender is just so "meh."

I mean, look. He wouldn't be a terrible signing for Aston Villa. He's at least at the level of Ciaran Clark and Nathan Baker when it comes to playing central defense, and that's something. Plus he's free this summer, and likely on lower wages than is Lescott. There is some upside here, to be certain. But the Swiss international pretty much defines the lack of ambition that we've seen from the club this summer. I know Paul Lambert doesn't have much to work with, but can't we all hope for something more than the lukewarm leftovers of Fulham?

This may sound like I dislike Senderos, and that's not true. I just dislike this rumour. Go away rumour, you're not wanted. 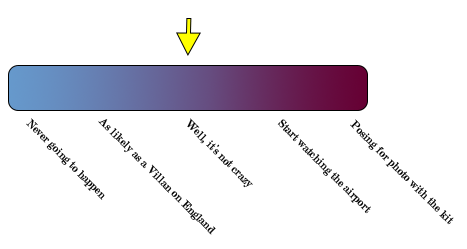