Villa may be looking at young Spanish playmaker

The connection is pretty darn tenuous, but it could certainly be an exciting move.

Share All sharing options for: Villa may be looking at young Spanish playmaker

According to a report on Sky Sports, Aston Villa are apparently keeping tabs on Spanish playmaker Aleix Vidal. The 24-year-old winger who plays for Almeria in La Liga would be an interesting addition to a club who so desperately need some creativity and poise in the midfield. Despite the fact that he is deployed primarily on the wings, he has the ability to play across all positions in the midfield.

In his 38 appearances in La Liga this year, Vidal scored six times and assisted three more. His first goal came in a 4-2 loss to Atletico, which sounds really impressive until you realize it was in the 90th minute when Atletico were already up 4-1. Even the best defense in the world can get sloppy from time to time. To get a decent feel for his upside, though, this video is worth a watch:

It's worth remembering that every player will look good when you put together a highlight package of them, but there are some great moments of stunning ball control in there.

With all of this build-up, though, there's just nothing to this rumour aside from the random line that "Premier League quartet West Ham, Aston Villa, Newcastle and Everton are all thought to be keeping tabs on Vidal's situation." He could be likely had for somewhere around £3 million, which wouldn't be a bad deal. But until I see something else, I'm dubious of this happening. In addition to the lack of good information on the rumour, there is the issue that the one area of the midfield with which Aston Villa don't really need help in the left side (assuming Villa continue to play Fabian Delph there). He can play elsewhere, but why target a left-sided mid when you don't need to? 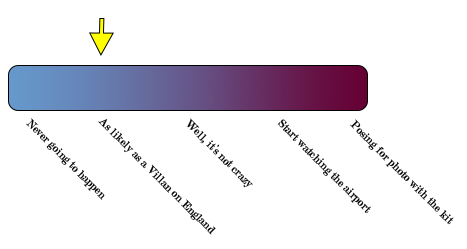