Compared to last season, this year's team was... still awful

A look at how Aston Villa fared in corresponding fixtures between this season and last.

Share All sharing options for: Compared to last season, this year's team was... still awful

Aston Villa, by almost any measure, performed worse this season than they have in any season in recent memory. Twenty league losses, ten of those coming at home, and eight fewer goals scored than last season's already-low number. The fact that the club are still a part of the Premier League is not a testament to their ability, but rather to the incredibly low level of play of the league's worst teams this year.

But if you look at a few trends, there are some signs of progress. Most important is an improved defense. Yes, there was that string of 4-1 losses (and 4-0 and 3-0) towards the end of the season, but overall this unit let in eight fewer goals than they did last year.

And then there is the improvement against some of the league's top clubs. Of course we had victories over Arsenal, Manchester City, and Chelsea, but there were also no repeat performances of the 8-0 and 5-0 drubbings of last year. In fact, this was a club that never conceded more than four goals. Yes, that's bad, but again: it's improvement.

Some of this becomes a bit more clear if you compare the corresponding fixtures from this year to last. Take, for instance, the visit to Chelsea that resulted in the 8-0 loss last year. This season? A quite respectable 2-1. I've been compiling the corresponding fixture information all season, and have the final table for you below. Note that, for the sake of completion, I randomly assigned the three newly promoted sides (Hull City, Crystal Palace, and Cardiff City) to the fixtures that corresponded with last years relegated clubs (Wigan, Reading, and Queens Park Rangers, respectively). 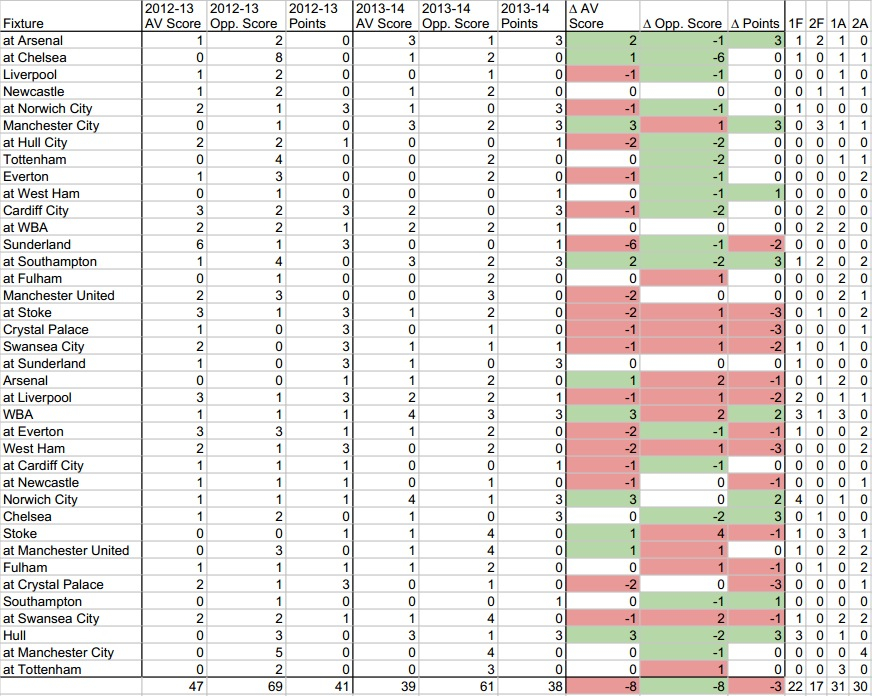 (Click on the chart to enlarge. The red cells indicate worse performances while the green cells indicate better. The far-right four columns are goals for and against in the 1st and 2nd halves.)

There is, of course, a whole lot of red on there, particularly on the goals scored side of things. If you except last years 6-1 drubbing of Sunderland, however, things don't look quite so bad.

On the goals allowed side, it's encouraging to note that, with one glaring Stoke-shaped exception, Villa never allowed more than two goals more in any fixture than last year. And even the 4-0 loss to Manchester City last week doesn't feel quite as bad when you remember that last year's version of that match ended 5-0. Improvement!

There's no predictive power in these numbers, but it does make an interesting exercise to see how Villa performed on a more granular level than the season. The picture is still pretty grim, but it's easier to spot a few bright moments.