If there's any reason to believe this rumour, it's because it's so typically Paul Lambert.

Aston Villa are apparently trying to bring an old foe to Birmingham in the guise of Bermudian striker Nahki Wells. You may remember Wells as the scorer of Bradford City's first goal in the League Cup semi-finals last season. In addition to handing Aston Villa one of their most pathetic losses in recent memory, Bradford City also secured promotion from League Two to League One, thanks largely to Wells' 26 goals in 54 matches.

Rumours of a £6 million bid for the defender are floating around.

With Libor Kozak now out for the season and Christian Benteke struggling to find a semblance of his last-season form, Metro are reporting that Paul Lambert is entertaining the idea of a £2 million bid for Wells' services. It would actually be a fairly sensible move: Wells is only 23, the price is fairly low, and he's clearly on the rise. As evidence of the last bit, Wells has improved on his scoring rate from last season, already having bagged 15 goals in 21 appearances, and against more tough competition to boot.

Despite the source not being my favorite, I'm inclined to think there may be some veracity to this rumour. Wells fits all the hallmarks of a classic Lambert signing. And if this is true, the price is low enough that I don't think we have to worry about the manager being hamstrung by economics and not getting the midfielder that this club so desperately needs. Until I see it from a few more sources, though, I'm going to be cautiously skeptical and give this a 3 on the 7500 to Holte Transfer Rumour Meter. 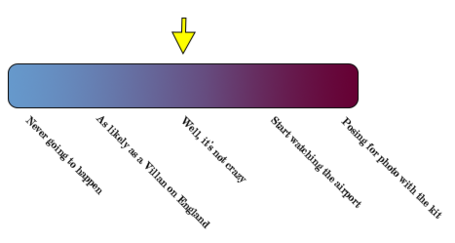 What do you think? Is there a chance of this move happening, and should it be one that Villa try to make? Let us know in the comments!