Remember when every transfer window involved a Robbie Keane to Aston Villa rumour? Well, we may have found our new Robbie Keane.

It must be transfer season, because the same reliable crop of rumours are cropping up once again. This time it's the idea that Aston Villa are getting ready to swoop for Manchester City defender Joleon Lescott. For the most part, I think we can treat this rumour the same way that Kirsten did when Lescott's name popped up last January:

Second, Lescott isn't really the sort of player Paul Lambert tends to pursue. Notice it's those outside the club clamoring for players with Premier League experience. Lambert knows he can best use his limited funds by securing details outside the inflated salaries and fees that plague England's top league. Even if Randy Lerner is showing his faith in Lambert by giving him some pounds to play with, he's not going to use them on a man that doesn't fit within the system he's building at Villa.

Paul Lambert is apparently looking to his old stomping grounds to flesh out Aston Villa's midfield.

But I think there may be one key difference between last winter and this: Lambert's situation. After what was a fantastic start to this season, things have gone rapidly downhill for the claret and blue, and Paul Lambert finds himself getting heat from all directions. Lescott remains the type of player who is too expensive and wrong for Lambert's system, but the manager may be under pressure to make exactly this sort of move, if only to appease fans.

I certainly hope he doesn't, though. Lescott is a fine player, but the rumoured £6 million fee is too high, and Lescott's wages would likely be as well. Maybe if Villa were getting someone younger than 31 this would make sense, but Lescott is getting advanced in his age and likely has passed his prime.

So let's give this rumour a rating on the 7500 to Holte Transfer Rumour Meter: 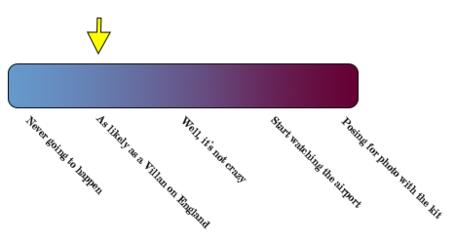 I could see it happening possibly, but I think Paul Lambert is too stubborn for it to actually go through. What do you think, though? Let us know in the comments!