There's a bumper crop of great gifs this week as we take a look back at Aston Villa's shocking come-from-behind victory over Manchester City.

Share All sharing options for: See all the highlights from Villa's 3-2 shocker over Manchester City

It's been a while since we've had a match this gif-able. But I've said what I want to about the match elsewhere, so let's just get to the moving images. We've got all five goals here, many from multiple angles. Let us know in the comments which is your favorite!

After a nail-biting opening 44 minutes, it looked as if Aston Villa would head to the locker room with a hard-fought tie in place. But then they conceded a corner. And the inevitable happened:

Listen, I'm as happy as can be about the match, but Villa conceding on corners is getting to be the most frustrating problem this team faces. Maybe someday I'll write a piece about what Villa would be like if they normalized their rate of concession on set pieces. But not today. Today is for gifs of fun.

Let's get one thing out of the way first: this goal should have never been allowed. There was all sorts of offside going on here. But, after a number of really terrible calls that haven't gone our way this year, this feels like Karmic return for Villa.

What I really love about this is the pass that led the goal. I have no idea how it got through both City defenders. The first highlight of the game from Leandro Bacuna:

And, because why not, here's another angle. Let this serve as a reminder that KEA can make a lovely shot every once in a while. Because this is a lovely shot:

Hey look! A goal from a corner! Christ this is annoying:

So let's look at more fun things. Earlier in the match, Kirsten had been lamenting the fact that it was impossible to be excited for Aston Villa set pieces, because they usually come to nothing. And I'm not saying this to prove her wrong, but rather to point out that she was just saying what everyone was thinking. So when Leandro Bacuna lined up for a free kick, I imagined it'd hit the wall or go sailing to Row Z. And then this happened:

A ball so perfectly placed that Joe Hart didn't even attempt to go for it. He realized he'd never get there, so why waste the energy? This shot went a long way towards earning Bacuna the Man of the Match award.

It's pretty from every angle, isn't it?

Unfortunately I only have one version of this. NBC's streaming service, when it works, gives great picture quality. But on Saturday, it spent all day being a steaming pile of feces and buffering every few seconds. So yeah, only one. Had the clearance at the end happened, I would have had a perfect gif in which - just before the ball crossed the line - the screen stops and "buffering" appears.

But whatever, we do have this one glorious moving image to keep us all happy:

My favorite part of this is Andi peeling off early to begin his celebration before the goal is official. I imagine I'd be furious if the clearance had happened, but it didn't, so all I see is Andi echoing the joy I felt. God this was a great moment, and the absolute best way for Weimann to open his account for the year. And to make up for only having one gif, I'd like to present my favorite photo of the season thus far. Click to make it bigger: 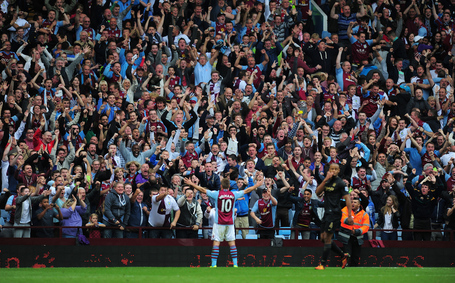 What a fantastic day to be a Villa fan. Let's all hope they can keep up the streak against Hull City on Saturday.