Aston Villa have said they will give Christian Benteke a deadline by which he needs to sort out a possible transfer.

Aston Villa will be setting an early-August deadline for Christian Benteke to seal any possible transfer move. It was widely assumed that since he handed in a transfer request, Benteke had found a suitor for his services. While Tottenham Hotspur have expressed their interest, no club has made a concrete offer as of yet. Villa are currently in Germany for a pre-season training tour and Benteke has been told that he needs to report to Bodymoor Heath for training when the club return.

While Spurs may be hoping that Randy Lerner and Paul Lambert's resolve breaks as the transfer deadline nears, it appears that the duo will be content to keep Benteke and force the player's hand into deciding if he'd like to play for a club he'd rather not play with. According to Mat Kendrick in that article, Villa are willing to have Benteke play, which means that we won't see the same freeze-out of the striker that we've seen of other players from Paul Lambert. 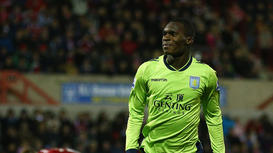 Tottenham are trying to drive down Benteke's fee by offering players in addition to cash. The problem: the players wouldn't be worth it.

If Villa actually mean to hold to this tactic, I think it's a shrewd move. There is no reason to sell Benteke for less than what the club values him at, so they may as well set a deadline to avoid distractions at the beginning of the season. Should no club meet the valuation, Benteke will be faced with the choice of playing or sitting out in protest. At this point, he's only got one stand-out season and no track record, so sitting out will likely not be an option. Add to that the fact that Benteke will be wanting to play for the Belgian squad in the 2014 World Cup and he will be needing regular playing time.

There's a bit of brinkmanship here, but Aston Villa are wise to be engaging in it. The transfer request meant that Paul Lambert has already begun planning the season around a Benteke-less squad. If he goes, there are myriad other strikers waiting to be played. And at this point, if he stays - and plays - it will almost be as if we've signed him anew: a surprise striker at the beginning of August.

I've got no problem with Benteke leaving for the right price, but I love that Aston Villa are holding firm on this.