Norwich to Villa: "Pay up!"

Young goalkeeper Jed Steer, out of contract at Norwich City, will sign for Aston Villa on Monday -- but the Canaries expect considerable compensation for the England U19 player.

Share All sharing options for: Norwich to Villa: "Pay up!"

My my, Norwich City are getting a wee bit cranky at Aston Villa. First we stole Paul Lambert, yet considering Norwich finished three points and four places above the Villa, you'd think they'd have gotten over it. Then, earlier this week, Lambert swooped for five members of the club's backroom staff, including the Canaries' assistant manager and their director of football operations.

But taking their 20-year-old keeper who played four matches in the Conference last season? Whoa there. That's going too far, Villa.

Jed Steer, an England U-19 international, sees his contract expire on July 1, when he will most likely make his move to Villa official. However, because he is under 24, the Bosman rules don't apply, and Norwich can demand a fee. And apparently the Canaries want "considerable compensation" for this player who was part of their plans "for next season and beyond."

Given that Norwich's keepers are so anonymous that I had to look them up to make sure I wasn't combining first names and surnames, I can see why the Canaries would want to keep hold of a top prospect. But really...how much can Villa be expected to pay for Steer?

Chins up, Canaries -- you're still destined to finish above the Villa: 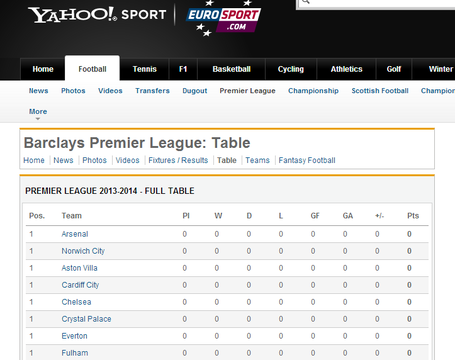