Relegation wouldn't even be a battle without Benteke

A purely speculative look at where Aston Villa would be without Christian Benteke.

Share All sharing options for: Relegation wouldn't even be a battle without Benteke

Aston Villa took a huge step towards removing themselves from relegation worry on Monday with their 6-1 victory over Sunderland. Christian Benteke played an integral role in giving Villa the goals they would need to change their goal differential enough to leap over Newcastle United in the table.

But I've been wondering, would Villa even be in the relegation battle if it weren't for Benteke? No, I don't mean they'd surely be safe, but just the opposite. I've got a feeling that they'd already be mathematically eliminated and we'd all be trying to figure out where one can stream Championship matches. So I set out to do what I do best: speculative statistics that don't really have a grounding in reality. You may remember this from before, when I examined how Villa would do if the rules of football were changed.

This time, I'm going to take a look at how many fewer points Aston Villa would have if we eliminated all of Benteke's goals. Now, allow me to point out the astonishingly obvious: THIS IS NOT A TOTALLY LOGICAL THING TO DO. Nothing exists in a vacuum. If Benteke were removed from the team, they surely would have gotten goals elsewhere, and things would have definitely changed. There's no way they'd be as bad as the following numbers suggest (though I really do think they'd already be eliminated if it weren't for the Belgian, just not so soundly).

But hey, I don't have a good way to quantify Benteke's value to the club, so this is what I'll go with. So here are all the matches in which removing Benteke's goals would change the result: 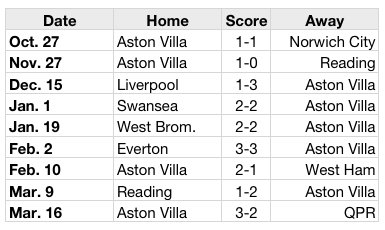 Now, if we simply take away Benteke's goals from those matches, here's what things look like:

If all of Christian Benteke's goals were to disappear on the season, Villa would find themselves suddenly missing 14 points. Aston Villa minus 14 points would be sitting in dead last with 23 points and an absolute atrocious goal differential.

What does this prove? Nothing really. And certainly nothing that intuition wouldn't tell us on our own. But if you needed another reason to see why Benteke has been so important to this club, you've got it. Again, there's no way Aston Villa would be sitting on 23 points through 35 matches, but absent Benteke, it's not hard to imagine them at 30 or so and - for all intents and purposes - out of the relegation conversation.

Paul Lambert found something special when he brought the Belgian striker to Birmingham for £7 million. But more than that, he might have saved Aston Villa's season.