After their loss to Manchester United on Saturday, Sunderland fired manager Martin O'Neill. An Aston Villa supporter explains why she wishes he'd been kept on.

Yeah, yeah, I know -- this isn't a Sunderland blog. If you're looking for one, head on over to Roker Report. They do good work there.

We Aston Villa fans must be forgiven for being interested in the fact that Sunderland gave Martin O'Neill the boot today. Despite little indication from the club that they'd lost faith in MON, it was apparent he wasn't getting the job done. Sunderland hadn't won in eight matches, picking up just three points during those weeks. Going into the match on Saturday, they were in 16th, four points above the drop.

Following the 1-0 home loss to Manchester United, club officials raced around looking for a nice door to shove O'Neill's big head on through. That's right, this time he didn't turn tail and run like a sniveling weakling. In fact, he probably stood tall and argued his case: I brought in Adam Johnson! I got you Steven Fletcher! I even convinced Carlos Cuellar to join me again!

Credit to MON, he did what he was supposed to do at Sunderland last season. Brought in at the start of December, O'Neill guided his new side -- his first gig since walking out on Villa five days before the start of the season -- quickly away from the relegation zone. The Black Cats eventually finished 13th and all seemed peaceful up north.

Interestingly enough, Sunderland supporters never really hit up the linen clearance sales and strung up the bedsheets. But they would have had good cause. £30m spent on four players: Johnson, Fletcher, Alfred N'Diaye and Danny Graham (and who knows what on earth their wages are). Acquiring James McFadden and Louis Saha. Playing absolutely woeful, dreary, football. Admitting the team "lacked real, true, ability".

This isn't the place to analyze whether or not Sunderland have made a silly decision in firing Martin O'Neill -- although we can tell them if they truly want to follow in Villa's footsteps, Alex McLeish is available. And he'll probably keep them up.

What's most distressing to most Villa fans is the fact that we didn't get the satisfaction of watching O'Neill lead his side to relegation. The way MON left is still seen as a betrayal to most of us, and we want him to get his comeuppance. Is getting fired enough? Not to me. There's not many people I would wish this on, but I want O'Neill shamed. I want him to deal with the agony of his failure. I want him to be turned upon, despised, hated.

The departure of Martin O'Neill pushed Aston Villa over the edge of the precipice and into this slippery, desperate position we've become all too familiar with. Here's a quick glimpse of what O'Neill did in his last two seasons with Villa: 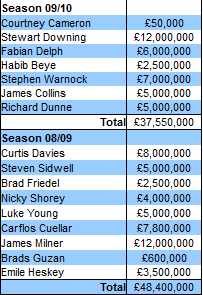 This table, of course, doesn't show the ridiculous wages paid to the likes of Habib Beye and Luke Young. Because of MON's reckless spending, the Villa have been forced into a period of austerity. We gambled on Gerard Houllier, and that didn't work out so well. Then came McLeish, brought in because we figured he wouldn't demand too much, and would be able to whip current players into shape. That's a period that we should never have to speak of again. Now it's Paul Lambert, who is well known for making good buys, but Villa are still mired in the relegation zone. Not only to we have to worry about the drop, but even without relegation, we're afraid we can't hang on to Brad Guzan, Andreas Weimann and Christian Benteke.

Sure, this wasn't all O'Neill's fault, but I will forever connect him with Villa's recent decline. For this, I can only ever wish him ill.