While Aston Villa are by no means clear of the danger zone just yet, their recent performances indicate the side may have turned a corner. Here's a look at the way tactical and personnel changes have altered Villa's game.

Share All sharing options for: Reason for hope: a closer look at Aston Villa's recent performances

Following (belatedly, so apologies) my first piece for 7500 to Holte, I wanted to look at our recent win vs Reading, as well as our recent performances against West Ham, Arsenal and Manchester City.

First off it was a superb result for Aston Villa against fellow strugglers, a 6-pointer which went our way after the most calamitous of own goals, heads could have easily dropped at that point as players possibly felt the world was conspiring against them, though I hope they aren’t that fatalistic. The equaliser, coming so soon after was a massive boost, and potentially prevented any nerves or doubts from creeping in, followed by the patience and composure in the build up to Gabby Agbonlahor’s winning goal.

In my first post I focused on forward players conceding possession too easily which may put the defence under undue pressure. A defence occasionally needs a break, and forward players can help by just playing percentage football, holding the ball, keeping it simple, something we didn’t do too well in the dreadful run over Xmas; the moment the defence or midfield played the ball forward, it was lost within a few touches, and the defence came under pressure. Against Reading our forwards protected the ball; Christian Benteke lost possession 3 times (compared to season average of 4.5 times per game, it was higher during that dreadful run), Gabby just once (season average of 3.1). It is of course worth remembering that this was fellow relegation candidates Reading, and that players will face much fiercer tests in the coming weeks.

Part of the improvement in recent form, even amidst defeats to Man City and Arsenal, may be due to the exclusion of Stephen Ireland and Brett Holman, whilst both players have merits (both have high tackle stats for attack minded players, Ireland makes the 3rd most tackles per game, Holman the 7th), they were guilty of surrendering possession cheaply without creating anything of significance. Charles N’Zogbia has been playing in "their" role, and whilst he has been losing possession more often than the aforementioned pair, he also pulls opposing players out of position with his runs which creates space for Gabby, Weimann and Benteke, who have been very effective recently. N’Zogbia is still erratic, and frustrating, but he has been showing signs of a revival.

Our forwards have also made improvements defensively, sometimes winning the ball high up the pitch, this is especially the case for Andreas Weimann, who made 4 interceptions and against Reading, 3 against Manchester City, 3 against Arsenal, 2 against West Ham, and 4 against Everton, while Gabby made 5 interceptions and 2 tackles against Man City. This energy from the forwards helps alleviate pressure from building on our defence. Brad Guzan has still been worked hard (to be expected against a few of our recent opponents), and has performed superbly, but there has been an improvement in defensive cohesion through the team.

Below is an image showing our 25 interceptions against Reading, primarily in the right back zone where Matthew Lowton and Ron Vlaar were kept busy, but also around the halfway line, which prevented Reading from creating any real pressure (until late in the 2nd half) and also put us on the front foot in relatively dangerous areas. 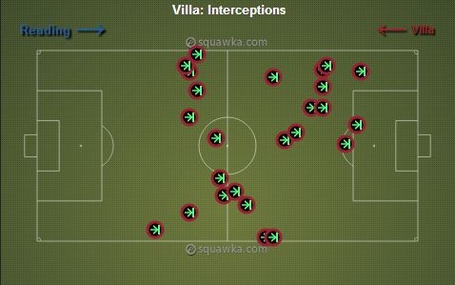 The Reading game also marked the full debut of Yacouba Sylla, and he put up a very solid debut in a very tight game. Tidy in possession, completing 82% of his passes, making 5 interceptions, 2 tackles, and winning 3 of his 5 aerial duels (height being something we have lacked all season in midfield). Not to take anything away from a promising debut, but Reading have probably the weakest central midfield in the Premiership, not only that but we had a man advantage in that area of the pitch.

He showed good athleticism, energy and discipline, he helped Lowton in dealing with McAnuff on occasion very well, and could often be seen covering as Lowton pushed forward, including (if I remember correctly) the build up to Gabby’s goal. I do think it worth remembering that his stats are no more impressive than Fabian Delph, who has arguably been one of our best players recently, against stiffer opponents to boot – 3 interceptions and 3 tackles, 85% passing vs City; 3 interceptions and 2 tackles, 91% passing vs Arsenal; 3 interceptions and 6 tackles, 90% passing vs West Ham; all 3 opponents played 3 in midfield against our two man midfield (with N'Zogbia given quite a free role in advance of our midfield duo).

Sylla will face a bigger test next week against QPR, should he play as Delph is still suspended, but he offers something valuable, and different, to the team. More than anything he provides the potential for both Delph and/or Westwood to push a little higher up the pitch and try influence play from midfield, as Sylla has the athleticism to cover for both and break up opposition quick counters. Ashley Westwood certainly has the ability and vision to pick out a great through ball, two examples against Reading; his pass to Weimann for the first, and he was pivotal, along with Barry Bannan, in controlling the build up to the second.

It has been a rough old season and it is far from over, with an over-reliance on young, inexperienced players, which has caused levels of inconsistency that no doubt frustrate us all, but there are signs of promise for the future if we can survive this year. The majority of Paul Lambert's young signings have performed well: overall Benteke has been spectacular, while Westwood and Lowton have been very consistent (with a few blips); Westwood keeps the ball moving and reads the game well, and Lowton impresses more and more, he supports attacks superbly. Even young Joe Bennett digs in when asked and has shown glimpses of talent and naivety in equal measure, and now Sylla has made a promising debut. Lambert has also improved the likes of Delph and Weimann as the season has progressed, Weimann’s workrate is exemplary and his desire is second to none, and Delph is always committed and maintains possession better than most give him credit for. Nathan Baker and Ciaran Clark have had their fair share of horrendous moments, however they do show signs of improving, and central defence is the one position where experience helps in reading the game, unless your name is Raphael Varane of course.

Lambert has stuck by the young players, he hasn’t been quick to criticise them (like the previous manager), and he hasn’t singled them out (unless they were deserving – like Clark against Man City), if anything he has praised them when praise was undeserving. The players could yet repay that faith he has shown, not only this season, but the coming seasons too, but at the moment it’s just one 6-pointer at a time, and up next it’s QPR.