Due to a recent influx of injuries to the Aston Villa squad, Paul Lambert will have a more limited selection of players for this weekend's match against Cardiff City. Which players will he select and what formation will he go with? Get an idea for the tactics with this week's preview.

The bad news: Aston Villa have not scored a goal in four games, dating all the way back to the 28th of September which saw the upset of Manchester City. Now some of this is due to the big man Benteke missing time through injury. Even though the Belgian made a speedy recovery, he hasn’t been himself in the matches since he has been back. The rest of the squad hasn’t really been much help in the goal department either.

The good news: In this goalless drought, the Villans have kept two clean sheets, both on the road. I for one, believe this means that Paul Lambert’s young defenders are starting to gel and learning to play as a unit. Obviously there is still a long way to go, but it’s a start.

Another thing is despite sitting in 14th on the table, many tough games are out of the way and it is a stretch of some very winnable games, but without taking max points in some of these, the team will drift deeper into the bottom half. Win some of these games though, and a finish in the top half will not be out of the question.

Lambert has had to tinker with his starting eleven in recent weeks due to injuries to many players. In addition to the players who are out for an extended period of time, here are the players who will miss out on this weekend’s match against Cardiff City at Villa Park:

Now while none of those injuries may stand out as being devastating to the squad, it’s the little things that eventually add up. For example, look at the left back position. Both Luna and Bennett are out, thus forcing Lambert to deploy someone who isn’t a regular there – aka Leandro Bacuna. If Lambert decides to go with a 3-5-2 variation this week, I suggest he goes for a lineup like this: 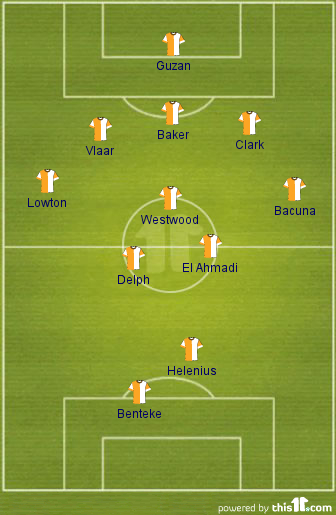 This option relies on Delph being fit, according to the club he was out with an illness, hopefully it isn't anything more serious. I think Nicklas Helenius needs to be given more of a chance, especially over players like Tonev and Kozák. The bench will be short, and will include players like Sylla, Bowery, and maybe some recent academy products. I'm not opposed to letting any of those kids play up front either.

A safer way to play would be to go with four at the back and a diamond in midfield. It looked like Lambert tried this last weekend against West Ham, but didn't really work; in part to Delph being out and the fact that Villa don't really have a true creator/ #10 to play in the hole behind the two strikers. Assuming Delph is fit, he could test it out again. I think it would look something like this: 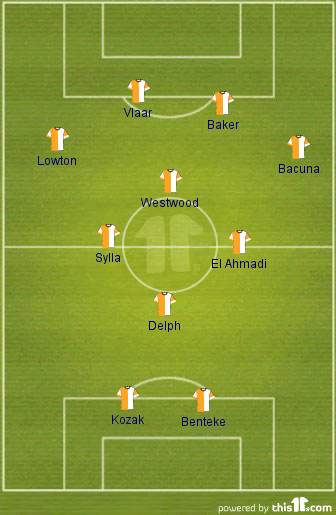 Those are two of the many options that Paul Lambert has for the match against Cardiff City. What would you choose to employ if you were the manager? Let us know in the comments!