Goal analysis: How El Ahmadi's strike against WBA came to be

Taking a look at how Karim El Ahmadi's goal against West Bromwich Albion came to be.

Share All sharing options for: Goal analysis: How El Ahmadi's strike against WBA came to be

In my collection of highlights from yesterday's match, I noted that the Karim El Ahmadi goal that opened scoring for Aston Villa came as the result of wing play. At many times throughout the season, Villa have reverted to a very narrow style of play, and the KEA goal is the perfect example of why that is such a problem.

(Note: none of the images are gifs, except the very last one.) 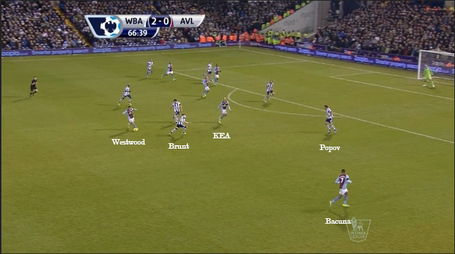 Here we've got the setup as the action begins. Karim El Ahmadi is just ahead of Ashley Westwood, where he found himself for most of the day. I've highlighted the key players that we'll be talking about for the next few paragraphs. At this point, no West Brom player has really taken any notice of Leandro Bacuna sliding out to the right. And really, why should they have? Bacuna had been largely ineffective on the day, and Villa had shown little propensity to push the match to the wings. 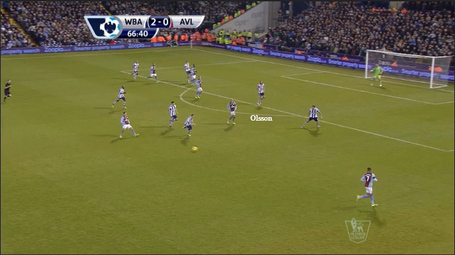 But Westwood takes a chance on Bacuna. This pass, as you can already see, begins to drag Goran Popov and Chris Brunt to cover Bacuna. The movement of these two will leave a ton of open space for KEA, and the logical choice would likely have been for Jonas Olsson to step up and mark the midfielder. 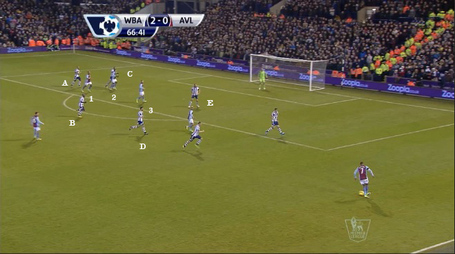 But Olsson doesn't do that. Instead he becomes one of five Baggies (marked with letters) to get drawn in by three Villans (marked with numbers. They are, I believe, Gabby Agbonlahor, Christian Benteke, and Andi Weimann, respectively). In some senses, this isn't a terrible idea. The sort of cross in that Bacuna will likely play (assuming he doesn't cut himself) will be ripe for a header, and in a 5-on-3 scenario, there's very little chance that a header will find its way to the back of the net. 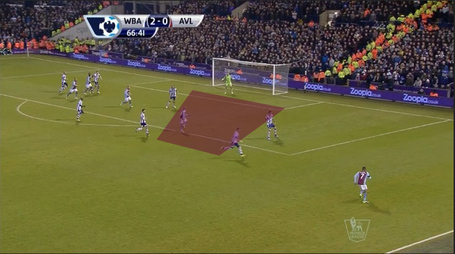 But as the play develops, there's one significant problem: Karim El Ahmadi has loads of open space. 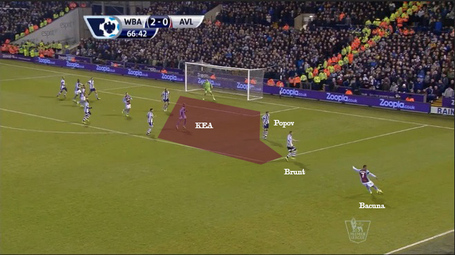 At this point, as Bacuna is getting ready to cross, the smart move would likely be to send the ball to KEA. But the angle is tough here. Brunt has stepped back, seeing that he can't get to the ball in time, and Popov has yet to commit to any one course of action. The cross to the scrum was probably the best option Bacuna had available to him. Still, at this point, Popov should be turning around to get back into the box. The header likely won't succeed, but someone is going to need to clear that ball. 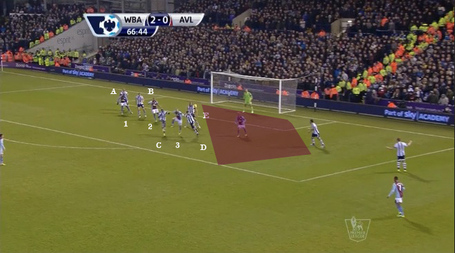 But Popov takes his time and when Andi (3) can't finish the header, it goes towards El Ahmadi, who has decided to set up a lounge chair and really enjoy the vast swath of space West Brom has left him. 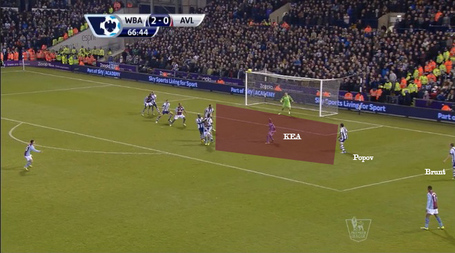 West Brom still had a chance though, since the ball doesn't go directly to KEA. But Popov's indecision has left a ton of space for El Ahmadi to work in, and someone is going to have to step up and help cover him. In this case, the only person left to help is the keeper, Boaz Myhill. 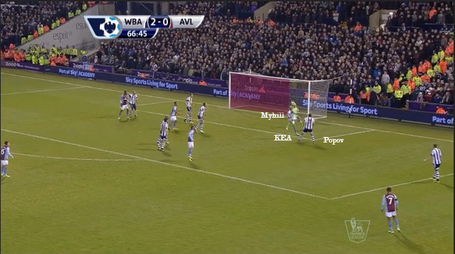 But Myhill's movement to cover means that, while KEA has a tough shot to make (coming from above, not a fun angle), he's got almost the entire open net to aim for. If he can get a boot on the ball and send it in the right direction in general, he's got the goal. 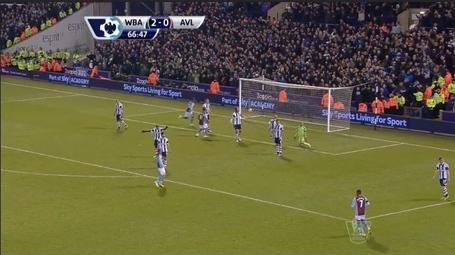 And, of course, that's what happens. You can see the entire play unfold here:

When Villa spread the match wide, they've got the speed and skill to create havoc in the box. The trio of Gabby, Andi, and Benteke are enough to draw terrified defenders to them in flocks, and while KEA isn't your typical player to worry about, anyone can be dangerous when given as much space as he was. The key to getting that space, however, is to play wide. Unfortunately the club don't have the greatest wingers to provide service up the side. The best they've looked this year in going up the wings has involved Leandro Bacuna on the right and Antonio Luna on the left. That's not a great option. Getting a player or two who could help spread the pitch should be a priority for Aston Villa in the coming transfer window.