A beginner's guide to betting. This article covers a few basic types types of bets as well as how to read odds and a few pointers.

Share All sharing options for: Betting 101: A Beginner's Guide to Soccer Betting

Betting is a huge part of soccer. Many teams and even leagues have sponsorships with betting companies. To go along with our weekly betting pool, we thought it was a good idea to lay out some basic betting strategies and tips. None of the writers for the site claim to be tipsters or even experienced bettors, so you may be in the same boat as us if you feel not entirely confident knowing what you’re doing when going to place a bet. This is just a basic guide to betting; a more advanced guide will follow in a week’s time. That will detail more types of bets as well as some metrics used for predictions and betting models.

We will start with a few basic rules, most importantly set out a budget and know your limits. Gambling is fun, but it is important to gamble responsibly and to know when to stop. Once you have your budget, set out what you want to use as your max stake. Say you were to have a budget of 200€, a good amount to set as your max bet would be 20€, or 10% of that budget. Bettors can be streaky, meaning you could lose a few bets before winning some, and you don’t want to run out of cash too fast.

Starting with a few basic types of bets, the easiest to predict would probably be your Full Time Result bets, where you have the choice of Home Win, Away Win, or Draw. Another bet that many people feel is easy to predict would be the Over/Under bet for total goals scored, with the standard being 2.5 goals. However, most oddsmakers will also offer 1.5, 3.5 and 4.5, depending on the teams.

Now you can go out and place just a single bet, and that would be called a Single, because it’s exactly that. However, when you are betting on the team expected to win, or the Favorite, there isn’t really much money to be made there. Ways to increase your potential return would be by taking multiple game results in either a Double (2 results), Treble (3), or when you add more than that to one bet slip, it is called an Accumulator or Acca for short. People also refer to their accumulators as a Coupon or Ticket. When you bet multiple games at once, the odds multiply by each other and again by your stake of course, so this is a way to make more money at once from a smaller stake. However, if one result doesn’t go your way on the accumulator, the whole bet is shot and you have lost.

Odds: The two most common types of odds to see are Fractional and Decimal odds. There are also American odds, but those are harder to calculate for multiples and are also not as commonly found for soccer betting. Examples of fractional odds would be 2/1, 5/6 or 9/4. Decimal odds for the same lines would be 3.00, 1.83, and 3.25. I like decimal odds better when calculating big accumulators, as they are easier to do than fractional. To convert odds from fractional to decimal simply do the math, and then add 1.0.

Taking a look at a betting website can be confusing at first, as it seems like there is a lot of stuff going on with all the bets you can make. Usually on the left side of the site there will be the different sports to choose from, and after one is selected you can choose the country and then the league. After you get to that, select the odds for the teams you like and you can add those to your slip. Websites also have odds calculators for you which is easier than going into a shop and calculating them yourself.

Example: Say you want to place a bet for the weekend after the international break. You pick out three games that you want to bet on and take the favored team to win. Three Premier League games I picked out just glancing at the fixture list are Chelsea vs Cardiff, Everton vs Hull, and Man Utd. vs Southampton. Here, I picked games that are all in the same time slot, and also am taking all the home winners. Picking games that are at the same time can make it easier to track, however if you like actually watching all of the games you bet on, you may want to stagger games throughout the day or even the weekend. A downside to that, is say you pick a Friday night game in Ligue 1, a couple Saturday La Liga games and the Sunday night game in Serie A, the coupon may have lost before you even get to the final game. Anyways, back to the Premier League treble I chose. Picking Chelsea to beat Cardiff would return 6.25€ from a stake of 5€. Everton would return 7.20€ from a stake of 5€. Picking Man United would return 7.65€ from a stake of 5€. Now if you put singles on all three of those teams and they happened to win, great. But you would have only netted a total of 6.1€ from an Outlay, or risk of 15€. Now a near 41% ROI (return on investment) is by no means horrible, but it is slightly boring. Placing the same 5€ bet as a treble with all three of those teams to win would win you back 13.77€, and with a profit of 8.77€ from a bet of 5€, that is an ROI of 175.4%. Here you are making a higher profit while only risking a third of the money. Now obviously, it is harder to predict three results as opposed to just one and if one of the teams loses or even draws your whole treble is done. But say Everton end up drawing Hull, you are only returning 13.90€ from your original outlay of 15€. 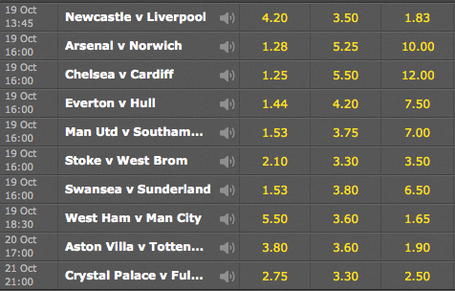 Another market that has been gaining popularity lately is Both Teams to Score or BTTS, also known as Goals Galore. This is exactly what it sounds like, and to win all you need is at least one goal from both teams in the game. Now the odds are very low when you are just taking one or two games at a time, but returns can be quite large with you take 4 games (usually 10/1) or especially when picking 7 games (about 50/1). Of course those 7 folds look very enticing but can be hard to land and you shouldn’t risk very much of your budget on that.

Finally, freak results happen. Just because a team has scored in 30 straight games doesn’t mean that they won’t be held against a weaker team at home. Keep your heads up if you’ve endured a couple poor results and try to learn from your mistakes. Don’t go over your limits. Betting is all about having fun and making games that you wouldn’t normally watch more interesting.

Happy betting and go out there and bash the bookies!