John Marsden, the scoring phenom who has found the back of the net 14 times in as many matches for Stockport Sports FC, has taken the time to answer a few questions from 7500 to Holte.

If you've been reading our Stockport Reports with any regularity, you are by now familiar with the name John Marsden. If you haven't, here's a quick refresher. Stockport Sports FC, the Saxons, are a team in the Northwest Counties Football League (NWCFL) Premier Division. That places them on the 9th level of the English football pyramid, non-league territory. They first came to our attention when it was announced that former Aston Villa superstar Peter Withe would manage the club.

In following the team, though, it's not been Withe who has been of the greatest interest, but rather a 19-year-old striker named John Marsden. He started off the season getting a few mentions in match reports - a goal here or there - but nothing that would draw my attention. Suddenly, however, he became the Saxons' primary threat in front of goal. In the match against Bacup Borough he scored a brace, and in this weekend's 7-0 trouncing of Norton United he scored four.

Four goals. Let that sink in. That's impressive at any level.

It seems strange that so potent a scoring talent would be languishing so low in the world of football. I've been intrigued by Marsden for a while now, and I'm thrilled to have had the opportunity to interview him. We discussed playing non-league football, the feeling one has as an in-form striker, his life off the pitch, and anything else I could think of. Marso, as he's known to everyone involved with the team, answered the questions you see below via email.

Since you're originally from the Liverpool area - and played for the Liverpool U14s - what impact did that football culture have on you?

Well being from Liverpool, football is a very very big thing in the fabric of all the people. With music and football being the passion of Liverpool, and being with me being born in the shadow of Liverpool's training ground plus the fact that I can't sing, there was only one way I could go. I played for Liverpool schoolboys at under 14 and under 15 level, we were a successful team winning the league and cups as well as winning the English Trophy. During the English Trophy campaign I hold the record for the most successive hattricks, scoring 4 on the run. I also scored in the final at Goodison Park.

You've played in the Wigan youth system, and were with Celtic for a time. How did you come to be with Stockport this year?

I was with Wigan Athletic from aged 11 to 16. During this time I scored 91 goals. This, along with the form for Liverpool schoolboys caught the eye of Celtic and in particular their head of youth Tommy Burns. So a month after my 16th birthday i signed for the Scottish giants for an undisclossed fee. To do this I left school at Christmas. Unfortunately for me, I broke my foot and was then unable to play for a couple of months. After two seasons - including six months with Hamilton - and with a lack of opportunity, I opted to try my luck elsewhere and moved back to England in January 2011. I went to a few clubs in England including 14 games for Rochdale in which I scored 11 goals. But none seemed to want to take a chance on a 18 year old boy, so i decided to drop into non-league to maintain fitness and keep playing. I was telephoned by the club then known as Woodley Sports [now Stockport] and despite having a few other options I agreed to go there.Then when the opportunity came to go back into full time football - and also the chance to work under the legend that is Peter Withe arose at the club - I was delighted to stay as I believed he could help me enhance my career through his experience in the game.

The Stockport home pitch is a long ways from the grandstands at Wembley, and you're obviously an ambitious player. What drives you while playing non-league football: love of the game, a desire to keep moving, or both?

I am very ambitious both as a player and a person, I want to play at the highest level I possibly can. This is really the only motivation I need because I believe I can play league football, so this drives me to that goal, but even with all the money in the world I would play football because I love the game. I learned to kick a ball before I could walk!!

You've been on an incredible run of form lately, doing - quite literally - the majority of the Saxons' scoring. No matter how much skill there is, a run of goals like this almost always has some luck involved too. What does that feel like as a player? Do you feel unbeatable every time you move down the pitch or does it add to the pressure?

I had no luck at all in the early games this season, every keeper seemed to pull off blinders, but as long as I am getting the chances I always believe I am gonna score. I've always said its not about the amount of goals I score but if we get the three points or not. Obviously I love to score goals like all strikers do but it is a team game and we win and lose together. I do believe in my ability to score and before I go onto the pitch I have a feeling that I will. I dont feel pressured to score but the win does feel better if you have bagged one! 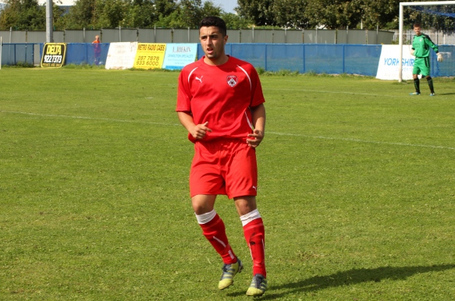 On twitter, you come across as a normal person, just like any of us. You've got none of the attitude that so many very skilled people have, and you seem to lead a pretty normal life off the pitch. How do you balance your football life and your non-football life? Do you find that one suffers at the expense of the other?

At the end of the day I am just a normal person, off the field I am no better than anyone else. As you can imagine, football takes up the large proportion of my life. When I am not playing or training I am watching, but I have a great family around me and I love to spend time with them.

Since we're an Aston Villa blog, I pretty much have to ask you this question: what is it like playing for Peter Withe? He seems as competitive as ever, and to be working hard to bring a winning culture to the young club. Does that come across to the players?

The gaffer has been great to work with. He is, as you say, very competitive and his desire to win rubs off onto the players. He is full of amazing stories and so interesting and at times funny, maybe being a fellow scouser we share a certain humour. He sets a high level of expectation and, as any player does, loves to win. I feel in the short time I have worked with him I have learnt a lot and I hope to continue learning from him as the year progresses.

Finally, what should Stockport fans expect from the rest of the season?

The Stockport fans can expect a young footballing side that love to pass the ball around. We work really hard day in and day out, and this shows on the field. The club is one that has the ambition to go higher and you can see this by the talent of player we have. This is the tightest team I have ever played for, certainly no big time charlies here I dont think the gaffa or Joey [Dunn, assistant manager] would have it and Tommo would bring them down to earth.On a personal note I am going to keep on scoring.

Thanks, of course, to John Marsden for being willing to do the interview, but also to Richard Smales and Chris Culkin of Stockport Sports FC for helping to arrange this. We will likely bring you some more Saxons interviews in the future, so be sure to keep checking in!