What Went Wrong Against Everton: A Closer Look

Share All sharing options for: What Went Wrong Against Everton: A Closer Look

I'm sure we would all prefer to put last weekend's 3-1 loss behind us. The whole thing was uncomfortable, I got all fidgety watching the highlights on Match of the Day and I cringed whenever Villa came up in reviews of the Premier League weekend. For good reason, it was a woeful performance. It's up there with the 6-0 at St. James' Park in 2010 as one of the most painful Aston Villa games I've ever had the misfortune to lay eyes on. However, amidst all the hubbub about which players Villa need to buy, there are a couple of things that are worth looking at a bit deeper. 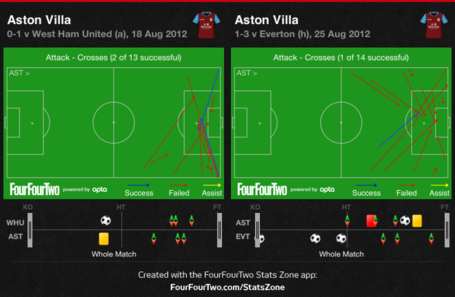 What you see here, created in the tremendously helpful FourFourTwo Stats Zone app, is a diagram of Aston Villa's crossing against West Ham and Everton. That's three successful crosses in two games. Darren Bent hasn't registered a shot on target yet this season. This is totally unacceptable, given that Darren Bent is meant to be Aston Villa's best player. In Karim El Ahmadi, Villa have a metronomic deep-lying midfielder, the likes of which we've not seen at this club for a while. But there's no connection between El Ahmadi and Villa's feeble attack.

While I give El Ahmadi credit for adapting quickly to the Premier League, I should note that the passing football we were all excited about in preseason has yet to arrive at Villa Park. El Ahmadi was Villa's best passer (36 completed out of 42 attempts), he was outpassed by most of Everton's starting 11: Leighton Baines, Leon Osman, Steven Pienaar, Darron Gibson, Marouane Fellaini, and Phil Neville. Everton's entire midfield and both fullbacks completed more passes than Villa's best player. Charles N'Zogbia only completed two more passes than Everton's goalkeeper, Tim Howard.

Not only did Aston Villa fail to put together a coherent attack for the second week in a row, they completely folded after Steven Pienaar scored Everton's opener. To be fair, it was a goal of genuine quality, even though Friend of the Blog Chris Nee claims that Shay Given should have done better with it on his excellent new Aston Villa podcast. But the way that Villa got their heads down after conceding was what allowed Everton to squelch any hope of three points before Paul Lambert even had a chance to take his squad of strangers and children in for halftime. (A parenthetical note, on booing: don't do it. Villa Park should be a place that makes opposing teams nervous, not our own.) 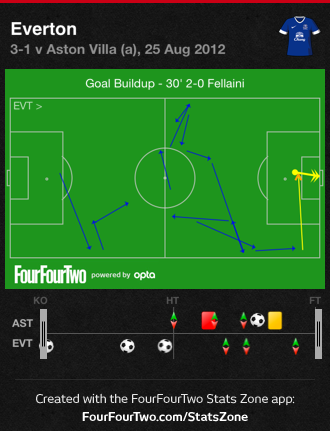 Above is the buildup to Marouane Fellaini's header. The real story here isn't the lack of trouble Everton had in creating the goal, although we should look at that:

(GIF via our own Robert Lintott)

That's lazy defending before the ball even enters Shay Given's postal code. But this is what has been giving Villa fans nightmares:

The man that bobbled that header is under contract with Aston Villa until 2016, when he will be 40 years old. A lot of people are calling for Brad Guzan to unseat Given as soon as humanly possible, but I think we should exercise caution, as weird as it is to write that under a GIF that is best soundtracked by "Yakety Sax." Guzan does have a long history of being our tournament goalkeeper. For that reason, he should be getting the start against Tranmere, no matter what. If he puts on a superhuman performance, and Paul Lambert falls in love with him, great. Put him in against Newcastle, and give Shay the challenge he needs. But unless the ability gap between Guzan and Given has doubled since last I checked, Shay Given should not be written off altogether. We can't afford to buy another goalkeeper, not with our poor finances and our other pressing vacancies. If this season is a disaster, I'll be reluctant to say it was Shay Given's fault.