Let me get this out of the way. I have no problem with the Aston Villa Player's Player of the Year gong going to Stiliyan Petrov. In fact I have the opposite of problems: I love it. No, what I'm here trying to figure out is why Stan received any sort of gong, and what exactly a gong is. I hadn't noticed this term when last year's awards were announced, but this headline from The Sun caught my eye today. If you're too lazy to click -- trust me, I understand -- it reads: "Shay: We've Gong Wrong." The story pretty much says that Shay Given felt that no one on the team deserved the player of the year award. Nifty. I think we can all agree.

But I had to do some searching. Why is is called the gong? A cursory Google search revealed nothing. A more in-depth Google search also revealed nothing. So, I went to the next logical place: Google Image Search. I was madly intrigued. Did player receive actual gongs? Were they full sized tam-tams or were they little miniature gongs that one would strike with a Q-tip? I figured certainly I'd get an answer through Google Image Search.

Unfortunately, I didn't. There doesn't seem to be a consensus. After the jump, I've got a few thoughts as well as what I actually did find.

As for what Google Image search did provide me, check this out: 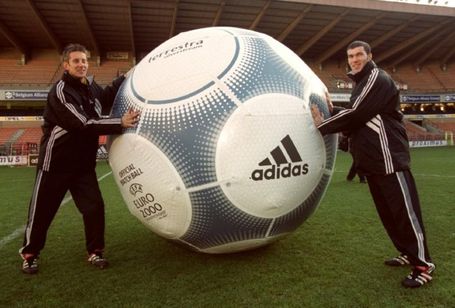 That's Edwin Van der Sar and Zinedane Zidane with a giant ball, not a gong. But it amused me, so there you go.Back to the gong, though. The best thing I could come up with is that gong seems to be a slang term for a medal. Alrighty, that makes sense, but most POY awards aren't medals. Maybe it's a hand-down from the age in which players did receive medals? I'm not entirely sure.

But, I've decided that we need other anachronistic possibly thrice-removed references (medals are gongs, gongs used to be [?] given out for POY awards, POY awards are still given out now) for award names. Here are my candidates:

Those were all I could think of, and should be abstract enough to confuse the heck out of Americans like me for years to come. Have you got any others? Throw them in the comments!