Gun Goat On: The N'Zogbia Situation

Share All sharing options for: Gun Goat On: The N'Zogbia Situation

Gun Goat is a heavily armed, football managing goat. He will occasionally be posting his thoughts on Aston Villa here at 7500. You can follow him on Twitter @GunGoat, and join the #GunGoatForVillaManager movement. 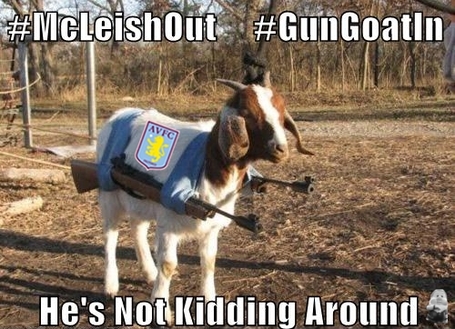 Anyone who follows Aston Villa will know that something has been up this season with Charles N'Zogbia. Rumours have swirled around for months now of a rift between Blazing Roaches and my Aston Villa manager predecessor, Alex McLeish. While this has been denied by the Ginger One, some of the Twitter postings of N'Zogbia point to problems.

If I had been in charge of Villa, we would not have these problems.

First off, I would almost always give him 90 minutes. Many times this season, Charles has been brought off after 70, or so, minutes, when there were other players who were more in need of being taken off. Too often has N'Zogbia been brought off while the glorified lawn mower that is James Collins has been left on the pitch to make a stupid mistake.

Secondly, I'd keep him away from Alan Hutton. That ought to make anyone's mood improve.

Thirdly, I'd try to accommodate his skill set more than it currently is. Now, I'm not sure how quite to do this, because my assistant manager, Machete Elk, is better suited to talk about tactics.

If this fails, I would just remind him that I have guns.