Share All sharing options for: Just When You Thought Things Couldn't Get Worse: Charles N'Zogbia Not Happy Playing Football

Charles N'Zogbia must've realized that his tweet was foolish as soon as he pushed the "send" button, and deleted it immediately, but Aston Villa supporters who had their eyes on Twitter caught this anyway: 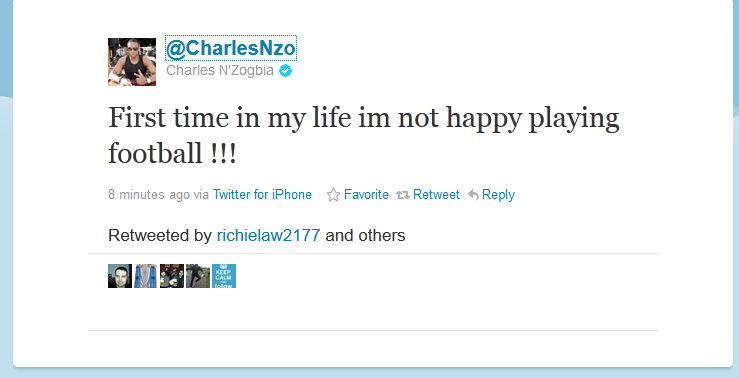 Well, let's see. Villa lost a lead to Arsenal to get knocked out of the FA Cup. Stupid defensive errors meant only a draw was possible against QPR. And today, despite the heroics of Robbie Keane, the team couldn't manage even a point against Newcastle.

But is N'Zogbia upset with the team performance, or is he on the outs with Alex McLeish? We've already seen the midfielder be punished for not obeying the rules, when he skipped out on a medical appointment. Then today, despite looking just fine in the claret and blue, non-Sir pulled N'Zogbia for...Emile Heskey.

Sure, it would make sense if Villa ever managed to score off a set piece. Heskey is, well, Heskey-sized, while N'Zogbia certainly is not. But most supporters questioned the logic of the switch. This tweet, combined with the rumors that Stephen Ireland blew up at halftime today, don't bode well for the Villa dressing room...