Aston Villa supporters, need something to lift your spirits during the match against Swansea? Join 7500 to Holte to see if the match commentators will mention each of the following 24 phrases!

Guys, it's been a horrible couple of weeks for Aston Villa. I'm reasonably certain that no one's confidence is sky high as we head to Wales to take on Swansea City. Not only have Villa conceded the same number of goals in the last three matches as they've managed to score all season, but they rarely looked capable of beating a fourth-division side -- alarming considering the League Cup quarter-final against Bradford City is coming up all too soon.

With all that doom and gloom hanging over Villa supporters, it seems we need something to cheer us up, give us a laugh. That's what this bingo game was intended to do. Instead I managed to create something that simply reminds us of the horror movie we're living in.

But no matter! Grab your cards and pop in to the match thread on Tuesday. Obviously this won't be a competition, as I've just got the one card available for use, but working together I'm sure we can identify the moments one of the announcers says one of the phrases on the cards. Who knows, we may even get a blackout! 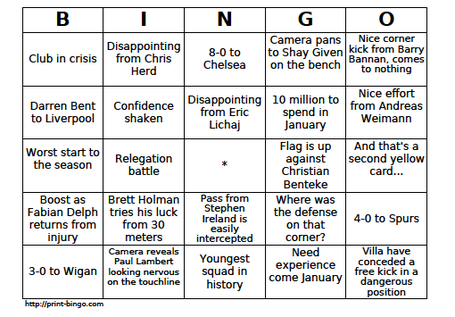 ***If you like this idea and think it should be expanded, including multiple cards and a fearsome competition, by all means, leave your thoughts on future phrases in the comments, either here or in tomorrow's game thread. Thanks to Coming Home Newcastle for the original idea***