Today In "How Does Piers Morgan Still Have A Job?"

Share All sharing options for: Today In "How Does Piers Morgan Still Have A Job?"

The ongoing Twitter fued between Piers Morgan and Rio Ferdinand has been fairly contentious for quite some time now, and seeing as how I don't like or care about either of them I've been largely successful in ignoring it. One thing I'm not inclined to ignore? Openly hostile homophobic comments. Take it away, Piers! 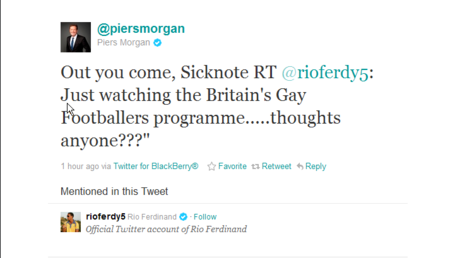 Now, the fact that Piers Morgan is an enormous prick isn't really news; the odds are quite good that he was not only aware of but explicitly endorsed phone hacking while editor of the Daily Mirror. His personality is about as pleasant as taking a shot of bleach and the only people that seem to like him are pretty horrible people. When Jeremy Clarkson thinks you're an arrogant, smug twat then you're really pushing the envelope.

But this is a new frontier in brazen jackassery. You can apparently do some pretty horrible things and still have a career in "news" media. Does anyone expect CNN or Fox Soccer to take "making homophobic comments on a social networking site" off the list? I sure don't.