Share All sharing options for: Liverpool Fooled Into Spending £20M Thanks To Technology That Was Only Mildly Impressive In 2006

Most of you will probably remember this video starring Stewart Downing, released by Aston Villa as part of their season ticket drive ahead of last season:

It was part of a series that also included Ashley Young, James Milner, John Carew and Carlos Cuellar, a nice little viral ad campaign that used video manipulation trickery similar to that employed by Powerade in a few wildly successful commercials a few years back. Predictably, a few gullible souls were tricked into thinking the commercials were real (and they invariably took to the virtual streets proclaiming to have "found out" Villa when the ruse was revealed to them.) It also turns out that some pretty high-ranking folks at Liverpool were fooled as well, and it may even have been the thing drew their attention to Stewart Downing in the first place:

There was some footage of Stewart where he was, from 30 yards away, kicking a football into five different trash cans and it was brilliant. John and I said: "Oh my God, this player is brilliant, we’ve got to figure out a way to make a deal with him."

Clearly, this is some sort of misunderstanding. Good for a laugh and all, but the quote must have been taken out of context or misconstrued. I mean, it's not as though a club like Liverpool could be so thoroughly fooled by such a clear ruse. Right? 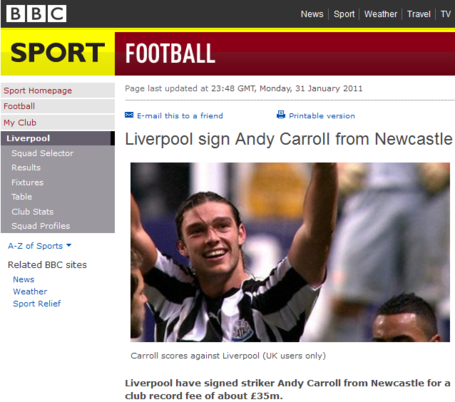