As I wrote about 3 months ago, I want to begin a series here on 7500 to Holte that examines tactics. What are they? How do we talk about them? And, most importantly, how do they impact the game and the team that we love? Some of the information here will be absurdly basic (positions, for instance), but my goal is to lay a foundation upon which we can discuss more nuanced topics. Additionally, I hope this can serve as an introduction for people just coming to soccer. There is no schedule for the series, but I expect a few posts over the coming weeks.

The most fundamental part of soccer is the players. You can have a pitch, and you can have a ball, but the game doesn't exist without players. And where there are players, people have shown a stunning ability to improvise for the other necessities of soccer such as that very same pitch and ball.

Given that the one true need of soccer is players, it makes sense that we should begin an examination of tactics with them. At the most basic level, every player (with some exceptions that will be discussed) tends to hold one position on the field. In an eleven-person team, there is a goalkeeper and ten outfielders. The players available and the positions they can play will largely determine any other tactical considerations for a manager. Let's take a look at the role and responsibilities of the main positions.

First, we should know what positions there are. The graphic below labels the most common positions, and their general spot on the field. (Click to enlarge) 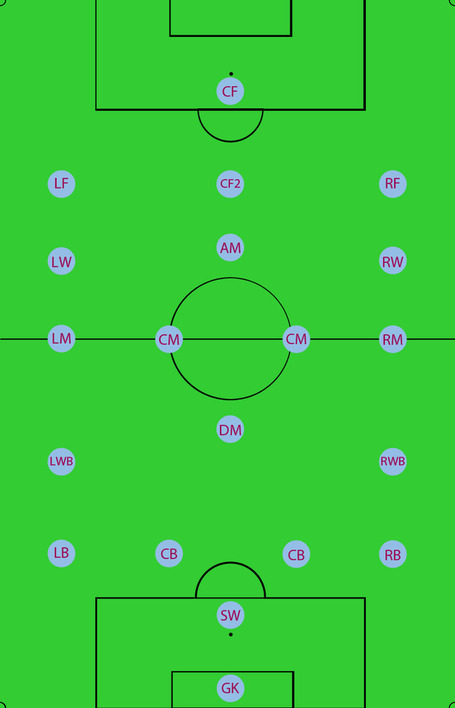 A manager will build the team's formation from some combination of these or similar positions. We will discuss formations in an upcoming installment of the series. The outfield players are generally put into three groups: defense, midfield, and forwards.

The defense is the final line between the opposition and the goal. As a general rule, defensive players spend most of their time in the half of the pitch that contains their own goal.

The easiest position to define on the field of play. Keepers are charged with preventing the opposing team from putting the ball through the net, and are allowed to do pretty much anything necessary to achieve their goal. They are the only players who are allowed to use their hands and arms to touch the ball.

In finding a keeper, one generally looks for a player who is tall and agile with an excellent jumping ability and quick reflexes. Additionally, keepers generally have incredibly strong legs and are often called upon to clear the ball more than halfway down the field.

The main line of defense in front of the keeper, center-backs are charged with preventing attacks through the middle as well as clearing the ball from the penalty area. Generally, they will either mark players (meaning that they defend one player at a time) or use a zonal defensive technique (in which they cover a certain section of the pitch). Center-backs are often tall and incredibly strong. They must be able to be cool under pressure, as usually if they are near the ball, they are the last people between it and the keeper.

These players, also know as full-backs, are charged with disrupting flank play of the opposition. If a goal is scored from a successful cross, it is likely that a left- or right-back did something wrong. In some systems, these players mostly stay back, while in others they may assume more offensive responsibilities. When this occurs, these backs may be referred to as wing-backs. For instance, Kyle Walker ostensibly played right back for Aston Villa last season, but in reality he functioned more often as a right wing-back.

Either way, Left/Right/Wing-backs must be fast players who have a keen awareness of the flow of the game. If the opportunity for a counter-attack presents itself, it is often begun by these players, and they are often called upon to provide crosses. However, they must beware not to be caught to far forward in the case of a counter-attack from the opposition. (See again: Kyle Walker).

The midfield is charged with linking play between the defense and the forwards. A team may have the world's best defense and attack, and if the midfield is weak they will have problems. The pace of the game is generally controlled by midfielders.

The main goal of defensive midfielders is to make the life of the defense easier. They are charged with being the first line of defense against an opponents attack and have the responsibility of directing the flow of play to the flanks of the pitch. Additionally, defensive midfielders can work as the directors of the attack by setting play in motion, either through the middle or up the sides.

As such, defensive midfielders need to be complete players: as capable in the role of tackling and defending as they are in passing. Even if the defensive mid cannot stop the attack, by directing it to the sides of the field he can limit the space (and thus options) available to the other team. Success as a defensive midfielder is achieved by easing the burden on the defense and completing a high percentage of passes to set up the attack.

Central midfielders, especially in a system that uses no defensive midfielder, are the circuit-board operators of a soccer team. Play usually goes through them, and they handle the majority of touches in a normal game. Their job is to link the defense with the forwards through runs and crisp passing. Center-mids must be aware of the game at all times, including the positions of most players on the pitch. Additionally, they must be creative and make positive contributions out of what is often seemingly nothing. A successful run for a goal can often be traced back to a smart pass by a central midfielder.

Height is not absolutely necessary (see: Barry Bannan), but it is often beneficial to have a player in the center of the pitch who can control the game in the air. Central midfielders must be in absolute peak physical condition, as they run an average of 10 miles (~16 km) per game. Over the course of a match, this means they average a 9-minute mile, all while tackling, passing, yelling, and more.

Attacking midfielders play much the same role, but generally a bit forward of the central mids.

Are they part of the attack, or part of the midfield? Marc Albrighton and the newest Liverpool player who shall not be named were unquestionably midfielders, and yet we all seemed to accept the fact that in a defensive role they were very limited. In a way, the wingers are the offensive equivalent of wingbacks, and in fact the two often work in tandem. When play gets pushed to the edges of the field, it is the job of the wingers to draw it back towards the center, either through crosses or runs. This provides the opportunity for interesting strategies. If a manager wants his wingers to primarily fulfill the role of crossing (if the forwards are strong in the air, for instance), the wingers will generally be positioned on the side of their dominant foot. This allows them to have the most accuracy and power while sending the ball into the box.

However, if the forwards are weak in the air, and the manager wants the wingers to keep the ball on the ground, they will often play on the side opposite their dominant foot. This allows for quicker runs into the middle. Increasingly, wingers are being asked to play both sides of the pitch, which means they must be stronger all-around players.

The people who get paid to score the goals. They may not have many other skills, but if they can put boot/head to ball and score, they are good at their jobs.

Pretty much the only variety of forward used by Aston Villa, these players live up the middle and try everything to get deep within the box. Last year, Aston Villa played either two center forwards at about the same depth (occasions when Heskey and Bent were in the game at the same time), or one well forward and the other in a roving role behind the first (Bent and Ashley Young, respectively).

The latter set-up allows for a bit more fluidity in the attack, and is especially useful if the roving forward is creative (or thinks he is. Right Ash?). When the two forwards are merely powerful shooters, however, it tends to be best to use the two-abreast style and leave the creativity to the midfielders.

In the most extreme version of a forward, you get players like Darren Bent. They are gifted with an almost preternatural ability to find the back of the net and seem hopeless in doing much else. So long as your team has only one or two of these players, their imbalance can be an asset rather than a risk.

While this may have more bearing in the post on formations, the movement towards total football is making positions more and more fluid. Increasingly players are expected to be able to adapt to game situations and change to different positions as mandated by the run of play. Even in systems where players specialize (still used by the majority of teams in the world), players may be expected to bump to the other side of the pitch. Marc Albrighton and Stewart Downing, for instance, were at their most effective when they were playing well from both sides and switching throughout the game.

While positions are basic, and many of us know and understand what they mean, a proper understand of tactics can't be had without the foundational knowledge knowing them provides. Knowing which players on a team play which positions (and play them well) allows a manager to create the best possible formation and tactical strategy for any given match. In addition, knowing the same for the opposition allows a manager to adapt as is necessary.