Aston Villa's New Home Kit Revealed: It Looks Exactly Like You Thought It Would

Share All sharing options for: Aston Villa's New Home Kit Revealed: It Looks Exactly Like You Thought It Would

Courtesy of the club's official Twitter feed, here's a peek: 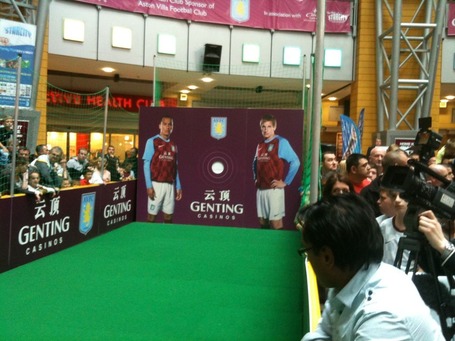 Same basic design concept as the away shirt, with the requisite addition of blue sleeves. I think it works a lot better in this color scheme (less like a picnic table) and the sponsor logo is a bit less ostentatious as well. The white shorts aren't a surprise, and I am guessing I'm not exactly alone in hoping the team goes claret-on-claret on at least a few occasions next season.

I'm of the opinion that Villa's color scheme doesn't lend itself well to a great deal of departure from a basic template, but I think the designers did well to work within some common-sense constraints to come up with something creative. This is close to the design that was leaked some time ago and I'll admit that after hating it at first it's really grown on me. I certainly prefer this year's home shirt to last year's. I'm also a bit curious as to whether we'll see a third shirt, and I'll admit to being curious as to what this design in blue would look like.

Once the launch is official, we'll update with any new developments.