Birmingham City were relegated on Sunday -- raise your hand if this is news to you. No one? Ok, so how about a fun description of what it was like to be at Villa Park for Survival Sunday, when almost no one was paying attention to Aston Villa beating Liverpool. 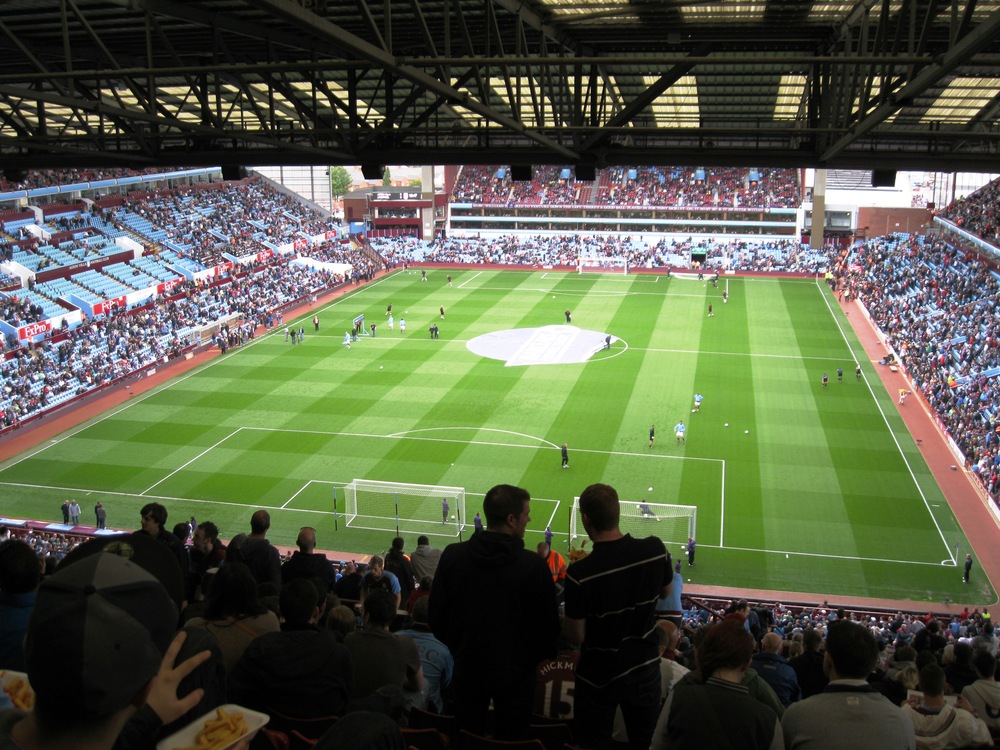 As most of you probably know, Sunday's match against Liverpool was my first experience at Villa Park. And oh my, what a bizarre first game to attend. For most Villa matches, I'm tense, with a gnawing feeling in the pit of my stomach, like I could throw up at any moment. But the mood for this one was giddy right from the start. The Villa were safe, and had nothing but a top half finish to play for. Even more significantly, there was a chance that Birmingham City could go down.

I imagine I'm not unique in the fact that when I usually go to football matches, I'm paying attention to what's going on in front of me. We sing songs to the players, chants of adoration to the club, mock the opposition. The cheers come when the team you support earns a corner, forces a save, or even gets the ball in the net, and the sighs, moans, and groans are heard when the opposition does something annoying. This match...wasn't like that.

Now, to be fair to the Holte Enders, there were certainly cheers for the Villa. Appreciation for kickoff. Chants for Ashley Young. Singing for Stewart Downing after his goal. Love for Marc Albrighton. I even got to sing the Gabriel Agbonlahor song, which seems like a weird thrill but after hearing it so often, it's hard to describe just how exciting it was to participate in that.

But the majority of the match was spent singing about Small Heath. About them going down. About the city being ours. You know the tunes. I've also never been at a match in which I've actively sang "Come on you Spurs." -- with as much gusto as possible. Villa Park had a rolling scoreboard, letting us all know the scores in the nine other matches. Even better, however, was the radio lurking behind us. There's practically no cell service in VP, so texts couldn't get through, and it was difficult to reach the ever-updating websites. But these smarty-pants had it under control, and they were the lifeline to the relegation battle. Shortly after the Villa returned to the field for the second half, these two started jumping up and down and screaming. Spurs scored. SPURS SCORED! Despite absolutely nothing happening on the pitch at Villa Park, the Holte End went mad. When the score flashed on the big screen, the entire place erupted.

I'm used to football uniting a group of fans--but usually it's over the play on the field, not over something happening between two other clubs. Or even more than that, in this case. Once Craig Gardner (and of course it was that bluenose traitor) equalized in the 79th, to a chorus of boos in Aston, it was time to figure out how else SHA could get relegated. Hugo Rodallega had just scored for Wigan Athletic, and if that score held, we knew there was a way Birmingham could draw and still go down. Jamie grabbed a program from a small child so he could do a bit of maths, and figured out that, should the score at White Hart Lane remain 1-1, another goal from Wolverhampton could send the scum down. Jamie O'Hara had scored prior to Gardner, of course, but considering Blackburn had gone ahead 3-0 early in the match, it seemed unlikely that Wolves would fight back.

Despite there being 81 different possibilities of how certain clubs could have been relegated on Sunday, somehow everyone in Villa Park had managed to figure out that if Wolves scored, Birmingham City would go down based on number of goals scored. So imagine the outburst when Stephen Hunt scored a second in the 87th minute at Molineux. From then on, almost no one paid one iota of attention to the game in front of us. Would SHA find another? The entire Holte End was on edge. By extra time, I'd even turned sideways, watching the guys with the radio. Villa had four minutes, but we didn't care -- we wanted to know the amount added in London. How long would we have to wait? Then the most high pitched scream I'd ever heard rang through: Spurs! Spurs scored again!

And there it was -- the definite end for Birmingham City. The yells, chants, and songs were so loud, so jumbled, that I didn't even notice that the whistle had blown in the Villa match, and whoa, we'd actually beaten Liverpool. I'm quite certain that many fans didn't even know the final score. One thing mattered, and one thing only: our mortal enemies had gone down to the Championship.

Last August, we Villans may have hoped for more. A return to Europe, a challenge for fourth. But a few months back, even this finish was unthinkable. Ninth place. Wins against Arsenal and Liverpool to wrap up the season. And Small Heath Alliance, back down where they belong.