Thanks to the grand hospitality of Adidas, who just launched the latest version of their Predator boot, I was fortunate enough to attend the Chelsea match last Sunday at Stamford Bridge. Newcastle may have equalized in the last minute of stoppage time, but it was a pretty amazing time anyway--fed, watered, and coffeed by Chelsea hospitality, sitting in box seats...and getting to meet my second-ever Player In My Pocket, Salomon Kalou! 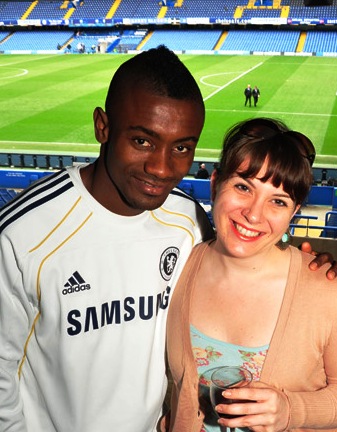 (Yes, yes, I know we're looking at the wrong cameras. I'm not very good at this yet!)

Kalou was pretty much what I imagined -- sweet, shy, slightly taken aback by the random people he was set to meet. Taller, though. In my original pocket player post, I accused wikipedia of lying about his 6'1" height, but I finally believe that he's not actually pocket sized. Darn, because he's as cute a button.

I'm sure everyone is surprised that I came away from a meeting with a pocket player without having to spend a night in jail, but I'm growing as a person. I didn't even squeal. I don't think. The squealing came on Tuesday...