In Pursuit Of PIMPs: Liz Owen Reminds Us All Why We Play Favourites With Her Tale Of Thomas Hitzlsperger

Share All sharing options for: In Pursuit Of PIMPs: Liz Owen Reminds Us All Why We Play Favourites With Her Tale Of Thomas Hitzlsperger

It's strange to think that this time about a week ago, I was looking forward to not only my first away game in London in the form of West Ham United versus Aston Villa, but to possibly meeting my favourite ever footballer and number one PIMP, Thomas Hitzlsperger. It's also strange to consider I didn't feel hugely excited about it, as I was fully expecting to be left disappointed (see opening day of the season for details). But so far this season I've managed to meet Barry Bannan (sorry Kirsten), Cheltenham Town midfielder Michael Pook, and Preston North End captain Sean St Ledger, so surely the omens were good for me to make it four out of four favourite PIMP encounters for 2010/11?

If that was the case, I made sure I was going to do it in style...or not. Out came the old 2002/03 less-than-aesthetically-pleasing Villa home shirt, purely for the HITZLSPERGER 12 printed on the back, carefully covered up on our journey down south as instructed by my concerned mother. Somehow, me and my sister Kath made it to our destination in one piece for about 2pm. For someone with such a poor sense of direction, I was actually impressed I had successfully navigated several Tubes and a bus to get there, despite the only two Tube lines leading to Upton Park being closed (nice one engineering works). We were also kindly escorted from the bus stop to the ground by a friendly local. Upon talking to him we discovered he wasn't quite local at all, but an Everton-supporting Scouser who happened to live five minutes away. We also learned he may not have possibly been completely sane when he casually told us his cat supported Millwall. Why do odd people always seem to choose me to converse with?

Fast forwards to the game itself. Even during the pre-match warm up, it hadn't quite sunk in that I was actually going to see Hitz play right in front of me, before my very eyes, for the first time since 2005. Obviously, it got a little more real when he set up Robbie Keane to grab West Ham's opener and set off every Villa fan thinking, "oh for Christ's sake, not again..." But it really hit home when, as I'd secretly hoped, West Ham were awarded a corner on our side. Up ran Thomas to take it, as I expected. Photos were taken and "awwww"s were squealed. 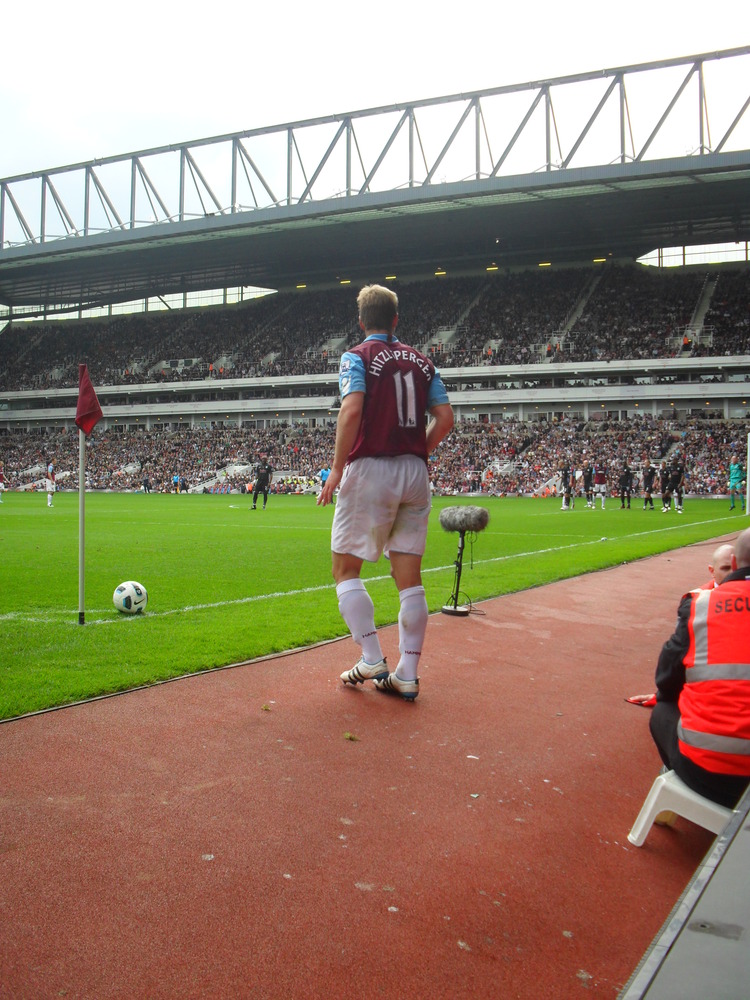 This picture demonstrates a huge positive of sitting on the front row next to the corner flag. In addition to the wonderful close proximity to the players, it actually gave a really good view of the pitch. I'd definitely love to sit that near to the front again. 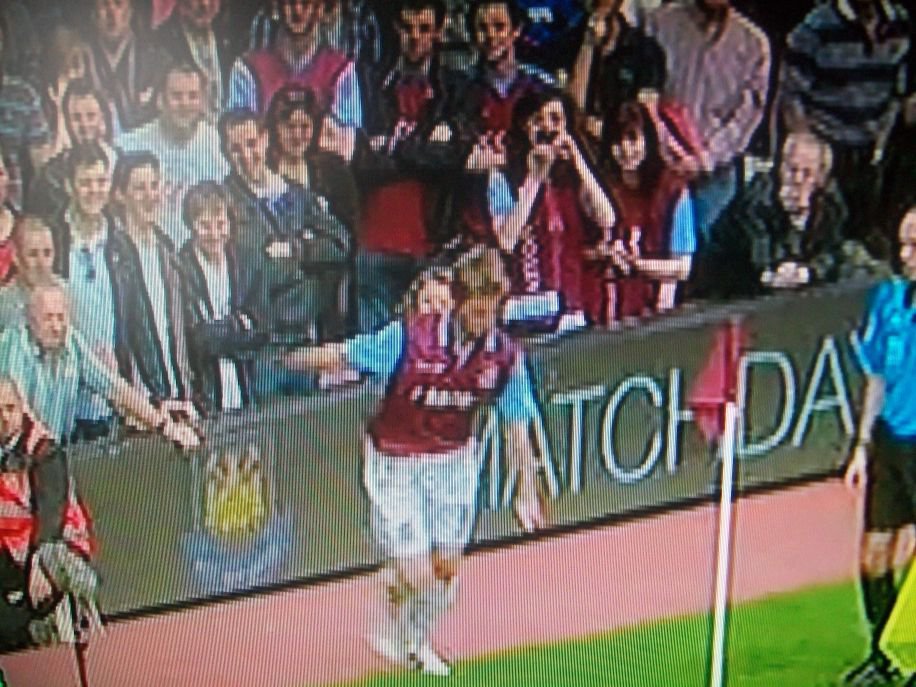 (Thanks to GoofyVillain for this great printscreen)

This printscreen, however, demonstrates the main downside of being so close: everyone watching at home, or later on during the highlights on Sky Sports, was able to see me every time a player came up to take a corner. As a result I got a billion texts and tweets from various people informing me of this, cringed throughout Match of the Day in fear of being shown on national TV, and worst of all, was caught in the act ‘fangirling' over Thomas.

As soon as the full time whistle blew, wild celebrations aside, my mind was already focused on my main mission of the day. Belting out the Gabby Agbonlahor song as I left the stadium, instead of following the majority of Villa fans, we turned the other way back to the car park, which we'd managed to locate on arrival. And there we waited. A Hammers fan noticed my shirt and directed me towards Thomas' silver Range Rover, where I duly stood like an obedient dog. We saw James Collins walk out of the front entrance to sign autographs and pose for photos, but decided stay put. Until, that is, a certain German emerged himself about five minutes later. My Hitz senses noticed this before my sister. They also seemed to quell all means of communication, as instead of informing her about this interesting development I was only able to gasp before sprinting over alone.

I could not quite believe my luck. I was not only going to be able to get something signed by Thomas, but have a photo with him as well! Or so I thought. As I should have expected, he was absolutely mobbed by fans, and it was going to take me a while to actually get to him. And a word of advice - never take the lid off your Sharpie before you actually reach the person you're going to hand it to. "Have I got pen on my face?" "...yes." "Great." It is apparently impossible to simultaneously rub your cheek and hold your ground in a crowd, and after a few minutes Thomas went back inside. I stood there dejectedly for a while, wondering if he was going to make a reappearance. 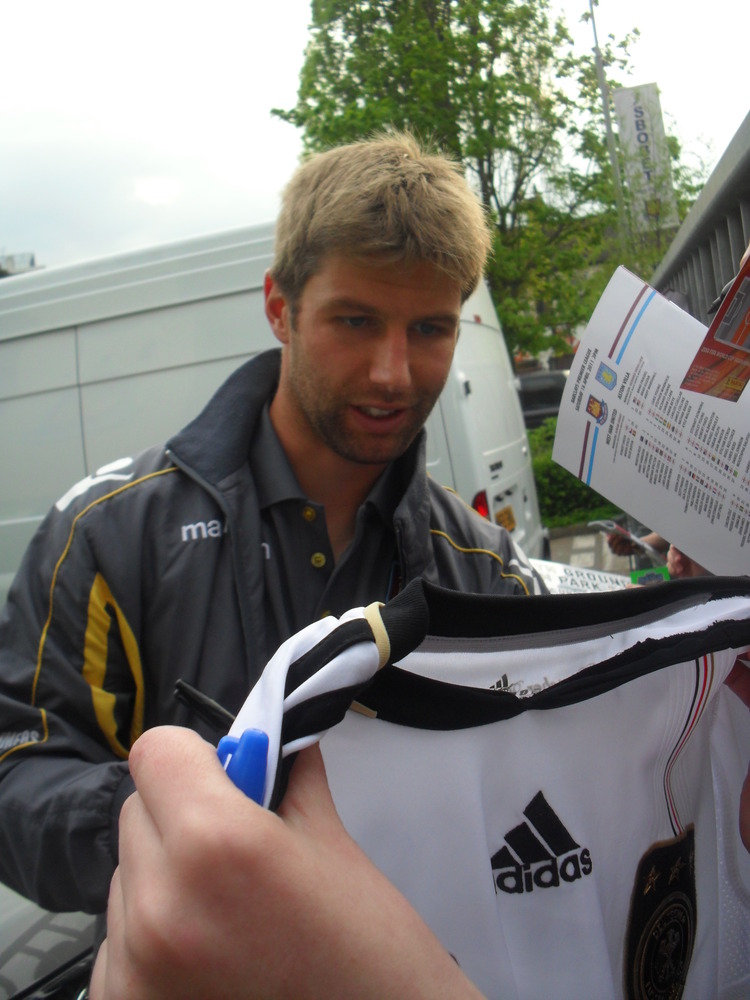 I then heard Kath yelling at me that Thomas had come out into the car park, so I ran back over and squeezed through the small gathering of fans to get to the fence and post my Germany shirt through for him to sign. And sign it he did! Finally. Thomas Hitzlsperger's autograph, on something I had personally handed to him. But I wasn't finished yet. As he got into his car, I walked around to the exit to see him drive out. Once again, there was a group of people who'd beaten me to it, rendering the chances of me getting a photo with him unlikely. As if that wasn't enough, a less-than-happy West Ham fan appeared and started shouting at him. "Do you think you've earned your wages today?" Okay, I completely understand his frustrations, but what good is that going to do? Poor Thomas didn't really know what to say. He just shrugged and looked extremely uncomfortable. The man continued, and I actually felt so angry that I reached out to grab his shoulder, before deciding that this would not be a wise move. Then, from the Range Rover, "Sorry, I have to go." And away he drove. And that was it.

Walking away from Upton Park, I wasn't entirely sure how to feel. On one hand, I was insanely happy that I'd actually been able to not only watch my favourite footballer live, but to get his autograph in person afterwards. Yet I still felt as though it wasn't enough. I'd have loved to get a photo with him, to actually talk to him and tell him how much of a hero he is to me, and how the Villa fans still hold him in high regard. But finding that Kath had taken a photo of him in the process of signing my shirt definitely swung my emotions more towards the happy side. And hey, I suppose it gives me a motive for a ‘next time.' Provides me with a reason to want to meet him again. And maybe one day, when I'm an established sports journalist in the UK (well, I can dream), interview him.