Share All sharing options for: Vernal Villan: A Green Bay Packers Fan Reflects on Cheering for a Super Bowl Champion

It felt so familiar last night. It was all crumbling down, and there was nothing I could do. I was going to spend another night devastated by something as simple as moving a ball around a field. What began in September was going to lead to February heartbreak. Sports seasons are long, and when your team is bad they feel interminable. When your team is good, they always leave you with the chance to get punched in the gut at the very last moment.

This was that moment. But let me step back for a minute. This column is all about being a new fan, and explaining fandom, so I should probably explain how last night came to be one of the most tense evenings I've ever spent watching sports. As a warning, what comes after the jump is only tangentially related to Aston Villa.

I grew up in a little town south of Seattle called Chehalis, Washington. As a kid, I liked three sports teams: the University of Washington Husky football team, the Sonics (though not that much, really), and the Seattle Mariners. The Seahawks? I never really cared. My parents were divorced, and I was raised mostly by my grandparents. My grandpa was a UW alum, and it was 1990 when I started living with them. Naturally, we watched the Huskies every weekend. But no one in the family was a big Seahawks fan. So some weekends we'd watch the NFL, others we wouldn't, and we never really cared what happened. A good weekend meant the Huskies had won.

Flash forward to 2007. By this point, watching the NFL over the weekend wasn't a choice, it was part of my life in the fall and winter. But I still didn't have a team. I just loved watching football with my friends. I lived with a Steelers fan and an Eagles fan. When the Seahawks were in Superbowl XL, I was happy for my Steelers-fan friend. It was the first championship he had ever seen his team win. People thought I should be mad, but I just never felt any affinity for the Seahawks. But in the summer of 2007, I started dating my girlfriend, and I found out that she was a massive football fan. I told her I loved the NFL too, but I didn't have a team. She told me she loved the Green Bay Packers, and that settled it for me. Football every weekend while dating someone and no guilt whatsoever? Yes, please. The fact that we'd have a shared experience was a bonus. I knew that Packers team just fine, but she brought me up on the history. By that year's playoffs, I had fallen for the team hook, line, and sinker. The Packers played the Seahawks in the playoffs, and I went through Sea-Tac airport in a Green Bay hoodie that morning. I gladly took a little crap from the security guard.

Since then, my love for the Packers has grown even deeper. This year's playoff run (going back to the regular season, really) had been exhilarating. The Atlanta game had been a joyful blowout, and the Chicago NFC title game had left me sick to my stomach before kickoff. But I was ready for the Super Bowl. I had never rooted for a team that had gotten to a title game. If you watched, you saw the Packers take a seemingly indomitable 21-3 lead in the second quarter. Things were firing on all cylinders, and life was wonderful. And then the injuries kicked in, and Pittsburgh started remembering that they are an amazing team. A few minutes into the third quarter, the Steelers had come back to make the game 17-21, with the momentum squarely on their side.

It was at this point that I began feeling a sense of déjà vu. The day before, I, as had most of you, had watched Aston Villa fall to a draw from a winning position. And I'd seen it before too. Suddenly, the Super Bowl was reminding me of the Manchester United game. You know, the fun one. Green Bay had come out brilliant early, and were now hemorrhaging points. Twenty-one years of being (primarily) a Seattle sports fan kicked in, and I began expecting the worst.

But it didn't happen. The other shoe never fell. The Packers got 10 more points and were able to stifle the Steelers. As the confetti fell, my girlfriend and I jumped up and down, and hugged, and did everything else you'd expect. I couldn't believe it had happened, and I still don't really believe it now. I've rooted for a team that won a championship. My desktop background is currently this picture, and it makes me smile every time I open my laptop: 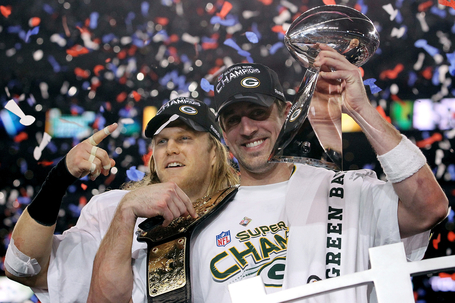 Aaron Rodgers has become, in the past three seasons, one of my favorite people in all of sports. He seems genuinely nice, and to see him so happy makes me happy too. The team was like a bunch of children as he took that final knee. It was amazing!

But here's the strange part. I've got two feelings running through my head today. The first is elation. That one is obvious. The second is this nagging feeling of this title somehow not being right. Not for the team, obviously - they were amazing, played through injury, and did everything right to get this - but for me. To have the first title with a team I've only followed for four seasons seems a bit... easy. But that wasn't what got me. I don't feel undeserving. I'm a diehard Packers fan, and anyone who tries to tell me otherwise is just plain stupid. What it really is, is that deep down inside, if I'm honest, I feel like it should have been the Mariners. They should have been my first championship. But they aren't, and I certainly can't complain about it. Who knows if they'll ever win one? I'm ecstatic with the Packers, but I know there's more.

And this is the part where I come clean. If it were Aston Villa winning a European championship? I'd probably feel the same way. Stewart Downing would score the winning goal, and he'd be my personal God. Marc Albrighton's smiling face would be my desktop background. I'd go around in a happy haze for a few days, probably weeks. My Stewie jersey would be worn constantly. It'd be nearly perfect. But I'd still be waiting on that other team.

So this is what winning is. Maybe we all have that one team. For most of our readers, I imagine that team is Villa. You grew up watching them and there's no other team you can love as much. But for others, it may be some other team. It's absolutely shocking to me to find myself holding back just a bit. I figured a title would be a title. How many times do you get that joy, especially if you're not from New York? But I guess I'm still waiting.

How about you? Ever had the same feeling? Is there one team that will have precedence over any other forever? Let me hear it in the comments. I'm eager to see what people think about this.