Share All sharing options for: Aston Villa 2-0 Wigan Athletic: Just What Was Needed

Not an especially interesting game from any sort of tactical standpoint, but an entertaining and well deserved win by the home side should give Aston Villa supporters a lot of reason to feel positive going into a tricky run of games. Gabriel Agbonlahor turned in another magnificent performance, scoring the first goal, setting up the second and in general making life for Wigan Athletic's back line completely miserable. Fabian Delph put in his best performance of the season; Alan Hutton was less of a disaster than normal; Stephen Ireland looked competent; and Barry Bannan continued to show he's one of Villa's best players, making it difficult for Alex McLeish to keep him out of the first eleven with any regularity. This wasn't a great or even good Wigan team Villa beat today but they looked convincing in the attack (and if not for some fantastic saves from Ali Al-Habsi this could have been a far more one-sided scoreline) and prevented Wigan from creating anything approaching a real chance at goal until deep in the game.

The first twenty minutes or so were little to write home about, the two sides feeling each other out and trading a lot of speculative balls without making many inroads. But as the half progressed Villa started to put a bit more pressure on the Latics with Agbonlahor's 36th minute goal the culmination. And my goodness, it was a beauty. Stephen Warnock (who looks very much like his old self this season, it must be said) did very well to wrest control of the ball from a Wigan attacker before sliding the ball to Barry Bannan in space. Bannan played a gorgeous lofted through ball for Agbonlahor who weaved his way through seemingly the entire Wigan back line before curling a ball past Al-Habsi to put Villa on top. The Agbonlahor show picked up again just 30 seconds into the second half, with Gabby taking a ball between the touchline and center circle and dancing through both the midfield and defense this time before sending in a low, driven shot that went a hair wide of the post.

From there on out Wigan would have some chances, but Shay Given had very little to do all afternoon. At the other end Al-Habsi continued to frustrate Villa, and without his heroics Villa could have had at least three additional goals. As it stood they'd get just the one more, but it was another beauty; Agbonlahor took a bit too heavy of a touch in pushing the ball into space in his own half but used his strength to win it back, went on a scorching 50-yard run down the touchline and sent an evil little cross to the waiting right foot of Darren Bent who gave Al-Habsi little chance to keep the ball out. From there Villa were content to soak up the pressure and ride out the win and though Wigan enjoyed a short little burst after Shaun Maloney was brought on they were still unable to do much to bother Given and after some adjustments from the home side Villa were able to regain control. Just a solid and workmanlike performance from Alex McLeish's men, easily their best of the season in all facets. With the three points Villa remain unbeaten in the Premier League and now find themselves in 6th place. What's more, only Newcastle United have allowed fewer goals (4) than Aston Villa (whose 5 allowed matches the number let in by Manchesters United and City.) There's still some sorting out of the attack to be done but there was definite improvement in that regard today. We all know this would be something of a transitional season, but so far it's difficult to be too upset with the standing of things. It gets much, much tougher next week with Villa's unbeaten status pretty seriously threatened by a visit to the Etihad Stadium to face Manchester City. This was a big result for Villa.

Some quick bullet points after the jump. 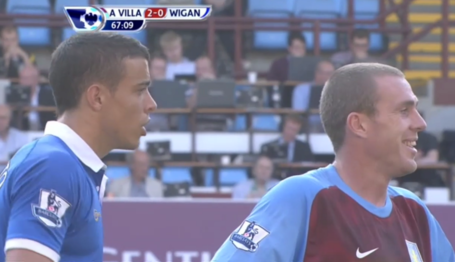 You should be feeling very good about this club right now. That was a good performance and fun to watch. More like that and we'll be just fine. But don't get too used to the positive vibes; Manchester City next weekend. Could be a scary one. But I'm a lot less worried about that game now than I was last night.