Manager: Harry Redknapp's managing career (kind of) began in 1976, when he signed with the Seattle Sounders as a player-coach. After four seasons in the NASL, Redknapp returned to England and in 1982 became manager of Bournemouth. After some minor success with the lower-level club (most notably defeating then-holders Manchester United in the 1982 F.A. Cup tourney,) Redknapp moved to West Ham in a lesser role, eventually becoming manager in 1994. During that time West Ham enjoyed their greatest success in the top flight, finishing 5th in 1997-98. During his time at West Ham Redknapp managed his nephew Frank Lampard, which is kind of adorable.

Redknapp left West Ham after the 2000-01 season to take a front-office position with Portsmouth; it was not long until he back on the touchline, however, taking the reins in March of 2002. Redknapp's first stint with Pompey lasted two years, after which time he took over as manager of Southampton, which needless to say did not sit well with Portsmouth supporters. All was forgiven upon Redknapp's return to Fratton Park less than one year later, and in 2008 Pompey lifted the second F.A. Cup in their history and first in almost 70 years.

Redknapp departed for Tottenham Hotspur early the next year, and Portsmouth spontaneously combusted after his absence. Tottenham, however, have never been in better shape; Tottenham were bottom of the table when Redknapp arrived eight games into the season, and finished in 8th place and as League Cup Runner's Up. Last season was Spurs' best in nearly 40 years, with a fourth place finish and a Champions League place.

Formed as an offshoot of Hotspur cricket club in 1882 and accepted into the Football League in 1908, Tottenham Hotspur made history early by becoming the first (and only) non-league side to win the F.A. Cup, in 1901. Accepted into the Football League 1908, Spurs have a long history of extended period of irrelevance and short periods of dominance. The first exceptional Tottenham side came in the early 1920s, winning their second F.A. Cup in 1921 and finishing second in the top flight in 1921-22. Within six years Spurs were back in the second division, and they would not return to the First Division until 1950; they celebrated promotion by going and winning the league.

Spurs remained a force in the league through the mid-1970s, but the most successful period in club history came in the early 1960s. They once again made history in 1960-61, becoming the first team in the 20th Century to win the League-F.A. Cup Double. Tottenham won two more F.A. Cups in 1962 and 1967 and won the 1963 Cup Winner's Cup, becoming the first English team to win a major European competition in the process; Spurs would also lift the first ever UEFA Cup in 1972.

By the late 1970s the wind had come out of the sails, however, and in 1977 Spurs found themselves relegated to the second division. Promoted on their first attempt, Spurs got to work rebuilding their place in the game and won back-to-back F.A. Cups for the second time in club history in 1981 and 1982 and a second UEFA Cup in 1984. Since promotion in 1978, Spurs have remained in the top flight and generally as a top-half side.

Tottenham won the eighth F.A. Cup in club history in 1991. That was all in terms of silverware until 1999 when Spurs lifted the League Cup for the third time in their history; they would hoist another in 2008. Aside from those victories, it's been largely mid-to-lower table existence for Spurs since the founding of the Premier League until their current Harry Redknapp-led resurgence, and the club will be eager to build on last year's success and their young talent to stay a top side in the coming years.

Gareth Bale: The Welsh-born youngster is a versatile presence on the left side, generally slotting at LB but fully capable of playing on the wing as well. Bale's left foot is a true weapon, and he generally takes free kicks for Spurs even when playing at LB. Bale is not an elite defensive presence at the back but he's more than adequate and his blazing speed, accurate passing and explosive shooting ability make him an extremely valuable player. He's a joy to watch as well, and at only 21 years of age should only get better.

Aaron Lennon: Watching Aaron Lennon stand next to Peter Crouch would be amusing enough to warrant paying attention in and of itself, but the diminutive winger brings the added bonus of being a pretty tremendous player. One of the fastest players in the Premier League and an exceptional dribbler, Lennon uses his explosiveness to blast holes in opposing defenses generally more well suited to thwarting imposing, physical forwards. Lennon is still young at 23 and is sometimes prone to relying on his speed as the answer to every question, but his game took a noticeable step forward last season. A polished version of Aaron Lennon with a fully developed football IQ is a thought that should keep opposing managers awake at night. 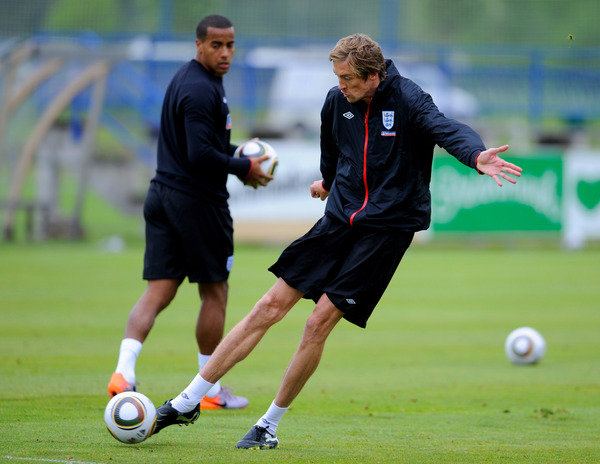 A Villa Fan Says..."Hope all those fixtures don't tire you out, boys!"