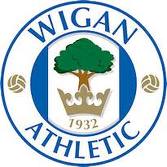 Manager: Roberto Martinez is a former former Latic, having played with the team from 1995-2001. He was brought over from Welch side Swansea City prior to last season.

In his first game at the helm, the Latics beat Aston Villa 2-0. HIs first season included some impressive highs and embarrassing lows. While leading Wigan to its first three wins over "Big 4" teams with victories over Chelsea (3-1 on Sept. 26), Liverpool (1-0 on March 8) and Arsenal (3-2 on April 18), he also presided over a 9-1 defeat to Tottenham and an 8-0 loss at the end of the season to Chelsea. The Tottenham game was the first time an EPL side had allowed nine goals since 1995, was the worst loss in the club's history and prompted the players to offer fans refunds. Wigan also suffered the ignominy of falling to League 2 side Notts County in the FA Cup.  The 79 goals allowed and -42 goal differential were both records for teams managing to avoid relegation.

Brief History: Wigan Athletic FC represents the town's fifth attempt to find a stable football team, having formed in 1932 after four failed attempts (Wigan County, Wigan United, Wigan Town and Wigan Borough). They are the youngest of all the teams in the Premier League. The Latics didn't even make their Football League debut until 1978, after 34 failed election attempts and one controversial attempt to get into the Scottish Premier League.

Wigan finally started making its move toward the Premiership in 1995 after the team was bought by local millionaire Dave Whelan, the owner of sporting goods company JJB Sports. At the time, he let it be known that he intended to make Wigan a top-tier team despite the fact that they were in the Third Division (what the fourth tier was called back then) at the time. After stumbling in Whelan's first year, he made the rare move of bringing in three Spaniards (one of whom was Martinez). By their second year, they helped lead Wigan to the Division Three title.

In relatively quick time, 10 years after Whelan bought the team, Wigan made their debut at the top of the pyramid in the 2005-06 season, having won the Second Division and finishing as runners-up in the Championship. During that time, they've finished as high as 10th (during the inaugural season) and as low as 17th (their second season). Their best FA Cup performance is making it to the sixth round in 1986-87.

In their brief EPL history, some of the notables who have worn their kit are Jimmy Bullard (now with Hull City), Emile Heskey (you know him) and Wilson Palacios (now with Tottenham and the Hunduras national team).

Players to Watch: Hugo Rodallega is the only player on the roster who broke double-digits in goals scored against EPL competition last season and will likely be the primary source of scoring once again this year. He'll turn 25 on Sunday, so he's likely entering the prime of his career after establishing himself as a fulltime starter last year. In his relatively brief EPL career, the Colombian international has scored 13 goals in 39 appearances (33 starts) since coming over from Atlas of the Mexican League. He also led the team with seven assists.

Charles N'Zogbia was probably the team's key playmaker last season, registering six assists and scoring five goals in 35 EPL appearances. Although he's been linked to rumors of him moving to Birmingham, it now appears as if he'll stay with Wigan. Mostly a left winger, he's also spent time at attacking midfield and left back. Still relatively young, 24, he has shown impressive passing touch.

Mauro Boselli was named one of the "20 newcomers to watch" by football.co.uk and certainly seems to be the player most likely to break out from this team. The Argentinian scored 32 goals during the last two seasons with reigning South American champions Estudiantes. Before transferring to Wigan for more than $10 million, he was supposedly getting interest from the likes of Manchester United, Chelsea and Manchester City.

Mohamed Diame won't blow you away with numbers, but he might be the most important player on the team. The French-born defensive midfielder is just 23, but has already drawn interest from the likes of Arsenal and several big Spanish clubs, where he was playing before being signed by Wigan. He draws raves for his strength, athleticism and tactical skill.

A Villa Fan Says: "Oh Wigan, you are so cute and cuddly. I just want to put you in my pocket and keep you for ever and ever."

Please feel free to point out any inaccuracies, as Jeremiah Oshan is quite new to following Wigan. In fact, he's only writing about them at all because of a dream he had, which also inspired him to start the blog Dreaming of Wigan.