Share All sharing options for: Fabrizio Miccoli Says No to Birmingham City 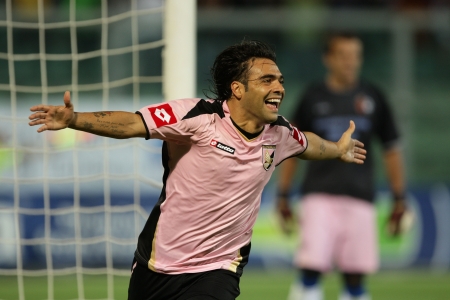 Rather than don the blue of our cross-town rivals, Fabrizio Miccoli turned down an offer to move to the Premier League in favor of staying in the lovely pink kits of Palermo. Miccoli seems truly Italian, telling the press that his head said yes but his heart said no, so I'm guessing he wanted to stay in the land of espresso and fresh basil to sit drinking milky tea on the wrong side of Birmingham. Maybe he's not a fan of curries?

The Palermo captain scored 19 goals last season but his club just barely lost out on Champions League play, with Sampdoria taking the final slot on the last day of the season. Instead they're heading into Europa, and Miccoli decided to be part of that. The BBC article gives us one of the best quotes of the week on Fabrizio's decision, that is if we hadn't already had the story about the guy throwing a puppy at a gang of Hell's Angels:

"Just a glance into his eyes was enough for me to decide," added Miccoli, in reference to his meeting with Palermo president Maurizio Zamparini over whether or not to stay in Italy. With signs like these, how on earth could he have left?