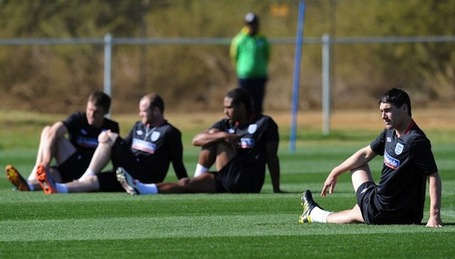 The true reason Aston Villa let Gareth Barry leave? Everyone else thought he smelled funny. James Milner, on the other hand, smells like freshly baked bread and a lavender meadow. So we win on all counts!

Barry will be in the starting lineup against Algeria on Friday, Fabio Capello confirmed to The Guardian. He might be stinkier than James Milner but as long as he doesn't look as though he's about to lose his lunch on the pitch, I'd rather see him in midfield. While I laughed at Barry's inability to have a good season at Manchester City, and laughed even harder at the fact that he won't experience Champions League play next season, he ties together the England midfield in a way that an ill James, or even a hey-look-how-fast-am-I Shaun Wright-Phillips, cannot do.

h/t to Dirty Tackle for the photo.