The Race is Won: Spurs to Champions League

Share All sharing options for: The Race is Won: Spurs to Champions League

On the off-chance that you've been disconnected today, sitting somewhere without a television, computer or phone, Tottenham went to Manchester City and walked away with three points--three points and a path to the group stages of the Champions League. Peter Crouch headed the winner past Marton Fulop and left City to cry in their gold-laced handkerchiefs.


Obviously Villa fans wanted this to be our celebration, but we knew it was a long shot. We failed to beat either City or Spurs this year (although Spurs failed to beat us as well) and we refused to win a few matches that should have been three-pointers. This left us in a position always uncomfortable for a fanatic: having to root for a club which, only days before, we'd been cheering toward failure.

We chose to throw our support behind Tottenham. When I say "we", I don't mean the royal we. I don't mean Aaron and myself. I don't mean the readership of this site. I mean every Villa fan that I've communicated with since Saturday at 9:00am PDT came out in favor of Spurs. In my opinion, this had very little to do with our love of Peter Crouch, or our admiration of Harry Redknapp, or our London bias. I'd say that our decision was based more on loathing than on loving.

Watching Crouch play freaks me out. I feel like I'm watching Gumby, and that he'll fold himself in half backwards at any moment. As for Redknapp, he left Portsmouth in financial distress, and I'm not altogether certain he's not going to do the same at Spurs, although to be fair they have considerably more resources. But I found myself yelling "Come On You Spurs!" as I drove around Portland today (windows up, do not worry) because I just couldn't stomach the idea of City clenching the fourth CL spot.

City wasn't meant to be the enemy of the majority of the Premier League. After all, they've been the ugly cousin to United for almost the entirety of their history. They had a spell of success in the 1960s and 70s, winning the league, the Cup Winners Cup, and the League Cup, but since that point, they haven't really angered anyone. Until recently. During the summer transfer window, the club threw around £100 million to buy the likes of Adebayor,Tévez, Touré, and Lescott. This left a bad taste in most other supporters' mouths, even if City fans insisted we were only tasting our own jealousy.

In some ways that's a valid point, this jealousy thing. I'd love to have enough money to ensure that we could hold on to our entire midfield while securing more depth and a genuine right-back. But yet the team wouldn't feel like my team. It would feel like an assembly of highly paid players, picked for their flash, but unsure about their place in a disposable system. And that's what City has played like--a team that is not quite confident in its own skin, a team of individuals not convinced they can trust one another.

And in the end, a team that couldn't buy either a place in the Champions League or the spell check function on Firefox. A team with style but little substance. A team ready to throw more money at the problem, bring in more players, find another manager. A team of complete desperation.

Somewhere in Manchester, Gareth Barry's dreams of Champions League play fizzled out like a cigarette on an English day. Villans are now united in hoping our former captain's dreams fall even further, crossing our fingers that West Ham pull a surprise out of their hat and push City down to sixth. But for tonight, let us all celebrate Crouch with a plateful of nachos. 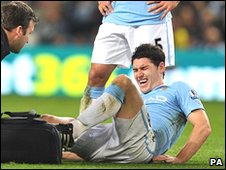