Sundays at the George: 8 Football Teams, 4 Beers, and One Controversial Penalty

Share All sharing options for: Sundays at the George: 8 Football Teams, 4 Beers, and One Controversial Penalty

This past Sunday, Aston Villa played their most hated rivals, Birmingham City, in a daytime derby. This meant that, to catch the game live, I would've had to be up at 4am--earlier, actually, because goodness knows I would need coffee for this. But considering our game wasn't on TV (good job ESPN2 on the fishing; it is certainly what I want to watch at 4am) I decided to skip the early wake-up call and park myself at our local soccer bar, The George and Dragon. After all, this weekend was one of the most important in the Premier League, so in order to distract myself from the internet and its score-revealing potential, I headed up to Fremont at 8:45 am, ready to watch 4 games back-to-back.

The beer: Are you kidding? I haven't even had my coffee yet.

The fanwear: Villa sweatpants. Hey, I just rolled out of bed.

I half-watched this least-of-my-worries match as I threw together a bag of supplies. However, I did see what was probably the most entertaining moment of the game, when Leighton Baines miscued a backpass and Erik Nevland came flying through to put Fulham on top. Alas, the Toffees ended up taking the game.

The beer: Cafe Ladro house blend coffee followed by a pint of Mac and Jack's

Burnley beating Liverpool was always a long shot, but give the Clarets some credit. They pretty much knew their season was done, yet they put up a good fight. They just couldn't actually put the ball in the net. Which sometimes you have to do in football. Still, watching this match was quite fun for two reasons: Burnley's seemingly homemade advert boards, and Steven Gerrard's gorgeous 2nd goal. I don't normally compliment the pug-nosed red, but that goal was a beauty. This game was also distinguished by me shrieking at the table of Liverpool fans next to me who had the temerity to be discussing the Premier League table. I first tried plugging my ears and humming to myself, but gave in and told them to kindly not say anything that might reveal my team's score.

I thought this game would be a nice time out from a twisting stomach. Turns out that Toronto ran circles around an unfamiliar Sounders lineup. I didn't appreciate it and took solace in stealing potato wedges and onion rings from others at my table. What I found most interesting about watching this game at the pub was that suddenly we were all of the same mindset. There were people in Liverpool jerseys, me with a Villa scarf, Chelsea supporters coming in to watch the next match...yet fists were dropped as we all experienced the same pain. Except for the one Toronto fan and I really hope no one let him bum a cigarette.

Sharing living space with a Chelsea fan meant that this game had to go Chelsea's way. Although the Chelsea supporters had seemed quite prevalent during the Sounders match, suddenly they had vanished. I may have read into this, thinking they knew the score, and started panicking that somehow Chelsea hadn't beat Stoke at Stamford Bridge. But the Blues gave Stoke a thumping, as the usually physically aggressive Potters couldn't seem to muster up the energy to fight back. Unfortunately, this match saw the weekend's second arm-crunching injury to a goalkeeper, when Salomon Kalou slid into the box and collided with Thomas Sorensen's arm, dislocating his elbow and causing Danish fans to bite their nails as the World Cup grows ever nearer. Stoke's backup keepr couldn't deal with a Chelsea that was clearly at the top of their game, and even let Kalou have a nice hat-trick to wear.

Villa fan says: :D finally, Chelsea gives someone a worse thromping than us. 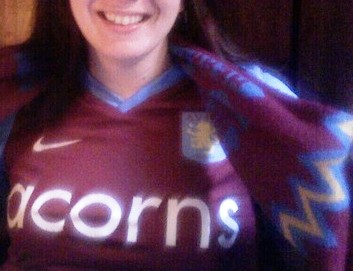 After eight hours of awakedness, being fully aware that every Villa fan in the universe besides myself and acblue knew the score, 3pm finally arrived. And brought with it an ugly, boring match, in which Birmingham were able to close down nearly every pass and forward play. Give credit where it is due: they battled it out and even threatened a few times, causing me to curse and yell out words that may or may not rhyme with "rum" "flu-toes" and "duck". Of course, all the talk about fair play ended in the 81st moment, when Roger Johnson fouled Gabby Agbonlahor in the area. Martin Atkinson pointed to the spot and Birmingham City threw a terrible tantrum, resulting in three yellow cards and an FA investigation. After the three-year-olds were chastised, James Milner stepped up and put away a brilliant kick, causing me to jump up, screaming, and nearly knock beer into my barely-touched roast dinner.

PS--as for that whole penalty v non-penalty nonsense, both Chris at twofootedtackle and Dan at Aston Villa Central wrote excellent pieces on the matter.

So, whether you're in the Northwest, elsewhere in the states, in England, or somewhere else entirely, we'd love to know where you watch the matches, and why. Stop by the On Topic post and let us know!