Villa News Links for the Aftermath

Share All sharing options for: Villa News Links for the Aftermath

Oh Villa. You have so much potential, and yet you have the ability to break our hearts so. Below, you'll find a few links to some tidbits from around the Internet. Gérard tells us the team's confidence is low, despite an absurd number of completed passes. You'll also find some news that is sure to make the FA look dourly down their noses at the Claret and Blue.

Make sure to read Aaron's reaction to the match yesterday and my suddenly less-relevant musings on a Liverpool side in trouble.

Our confidence is low, admits Aston Villa's manager Gérard Houllier - The Guardian
This is never what you like to hear from your manager, but at least he is being honest. He always is.

Villa go on a passing frenzy - Aston Villa Central
Well, amidst the terror yesterday, we did complete 457 passes. I can't even get that through my head. Dan notes the comparison between that and the considerably more exciting Manchester United match. For visual reference, take a look at the image below, courtesy the Guardian chalkboards. Yesterday's match is on top. 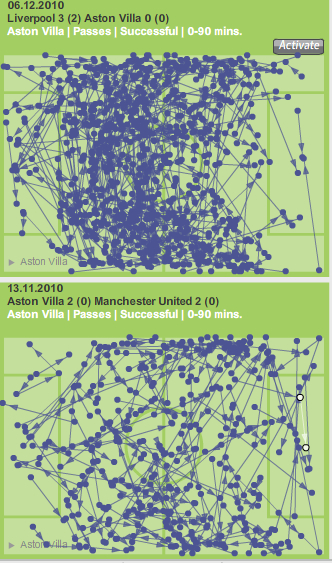 Flare Thrower Arrested - Birmingham Mail
In more trouble following the Scrum with the Scum, a Villa fan has been arrested for throwing a flare at the blue-nose fans. We can talk about who threw what first elsewhere, but this is likely to make the FA look more severely at Villa. Never good.

Villa Park in the Snow Wallpaper - Official Site
Well, it's something pretty to take your mind off of yesterday.

Note: Kirsten is in the midst of law school finals, so she may be a bit spare around these parts in the coming week or two. Look for a bit more from Aaron, Gareth, and me in the meantime.