The January transfer window is nearly upon us, and that can only mean one thing: it's time to play "Villa are sure to be getting Robbie Keane!" The rules of the game are simple and as follows: transfer window approaches and newspapers and fans are required to yell "OMG ROBBIE KEANE ASTON VILLA" until they turn blue and fall over; Robbie Keane does not sign with Aston Villa. Look, I've even included a flowchart to help you. 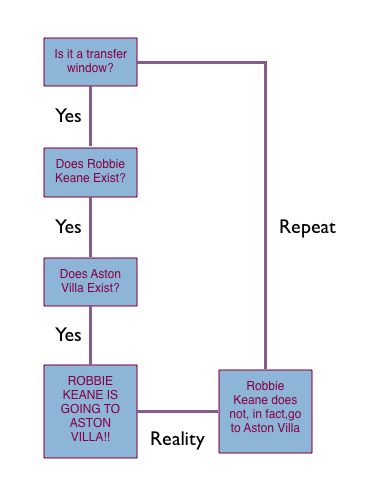 But it appears as if something has altered our peaceful circle. Something has caused an imbalance. And if there is imbalance in the universe, the Scum are bound to be behind it.

According to The Daily Mail, it appears as if the Blue Noses are looking to poach the aging and unwanted striker from Villa. Now there are two ways to look at this. The first is that Villa actually are serious about getting a striker who is clearly in his decline phase. This is terrifying, as we already have one of those in John Carew, everybody's favorite Norwegian. However, within the realm of this first view, we can still take relief from Birmingham City trying to take him. It does make a certain amount of sense that he'd go to a club that's eager for his services (and willing to foot his £65,000 per week wages), rather than going to a club at which he is always connected but never really wanted.

The second way to look at this is: oh dear heavens, City are willing to take on a big useless salary just to spite Villa in something they don't want. Cutting off the blue nose to spite the face. In this scenario, flowchart 1b takes effect: 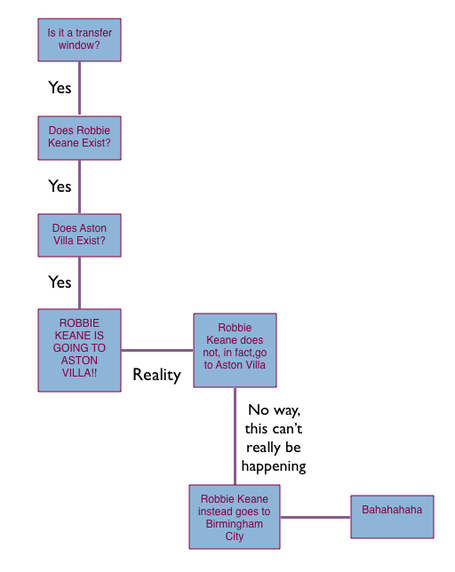 Either way, this is great news for Villa, as it is one less stupid move we can make. So the next time you see a Scum fan, thank them for this before you berate them for being stupid.