Boyfriend left for work, leaving me sitting at the breakfast table, staring at the mugs and thinking about tomorrow's match. 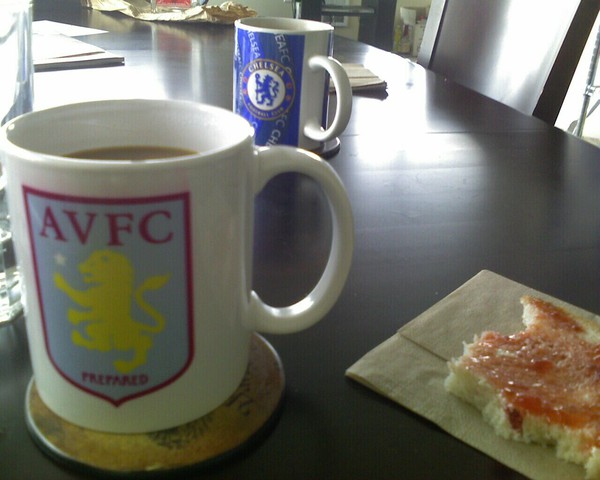 Yes, that one in the background is a Chelsea mug. We are a divided household--something one sees often in the States when college sports are involved, but quite rarely when it comes to professional sports. Especially when the people involved are not geographically connected to a team.

It's not so bad, dealing with a Chelsea supporter. Sure, the confidence that one's team will win gets irritating, and having to hear "Blue Is the Color" on match days is more than a little annoying. But with an admitted crush on Frank Lampard and absolute contempt for other clubs calling themselves the Blues, I feel that there are many things in life that could be worse than serving tea in a Chelsea mug.

What's bothersome to me occurs outside the home. There are two questions I hear often. The first is from people who learn my boyfriend is English: "Oh, so he's a Villa supporter too?" The second is from those who learn he is a Chelsea fan: "When are you going to start supporting Chelsea?"

Clearly these questions are posed by people who I've just met. They don't know just how big of a Villa supporter that I am, and they don't know how my fandom came to be. Yet they remain tiresome. No one asks if he will switch his support to Villa. In fact, in the history of the world, just how many times has a man decided to adopt a sports team because it's the one the woman supports? How many times has he switched allegiances in order to make a girl happy, or to spend more time with her?

One could argue that a woman is more rational--she is willing to accept that sports are just a pastime, and that perhaps the harmony of a household is more important than swearing unrequited love to a bunch of athletes whom you've probably never met. It's certainly simpler to deal with one sports schedule rather than two (I can't imagine what it would be like if we cheered different baseball and hockey teams as well). And really, if sports offer nothing more than an occasional social gathering, why would it matter which colors the players are wearing when you cheer?

Rationality aside, what is it that turns men into committed fanatics, and why is it that women rarely seem to follow this path? Is it culture? Is it a holdover from the days when women rarely went to sporting events? Is it because they are still expected to have to run a household and not focus on such trite matters? Perhaps it is because women have socially acceptable ways to express love and affection, whereas oftentimes men still require a sporting event to exchange hugs and profess their devotion?

While in England, someone told me that 1/3 of the crowds at football games consist of women (no, I don't have a reference for this). Even if that is so, it makes me wonder how many of them were there because they love it, and how many because they were brought there by a man? Not once did I see a woman watching a football match, live or in a pub, without a man by her side.

Don't get me wrong--I know many American women who are committed fans of a variety of sports. I'm sure they exist in England as well. But we still seem to be in the minority, and I just can't figure out why. We have tension, anger, lust, and depression bottled up inside us as well. Sometimes it seems like it would be better to vent through sports rather than by means of heartfelt talks.

Alas, for now it remains that I am in the minority--which means that, come tomorrow, this flat is split into opposing camps. Cheers of joy become anothers howls of rage. One is fighting for a top spot, another is consoling herself with the thought that she would rather win on April 10th. Mugs might be dashed upon the floor. Likely it will be a tense day. But I'm not giving up the Villa for the sake of a little domestic tranquility.