Share All sharing options for: The. Best. Day. Ever.

Ok, so 28 February 2010 could've been a bit better. The Villans could've won, for instance. I could have spent less than 200 pounds for a seat. I could be not feeling guilty about still owing a Welshman that I'll never see again 50 pounds. It could've taken me less than three hours to regain feeling in my fingers. 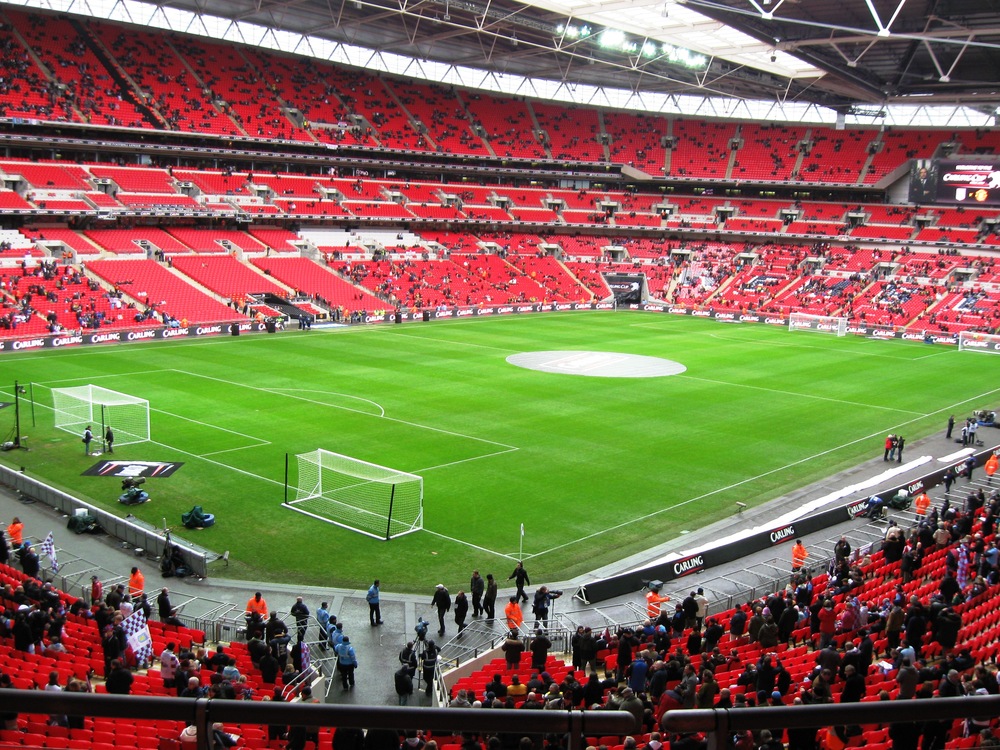 My seat at WEMBLEY

I left the flat at 11am to catch the bus to Wembley (which, if you know your London geography at all, is not four hours from Ealing). About a mile before the stadium, the excitement got to me, so I hopped off the bus to be with my people--who were the majority of the people. I had never seen so much claret and blue (please be reminded I have never been to Villa Park) (or to Burnley for that matter) (or even to West Ham). My people and I edged closer and closer to Wembley before dodging the traffic and facing this: 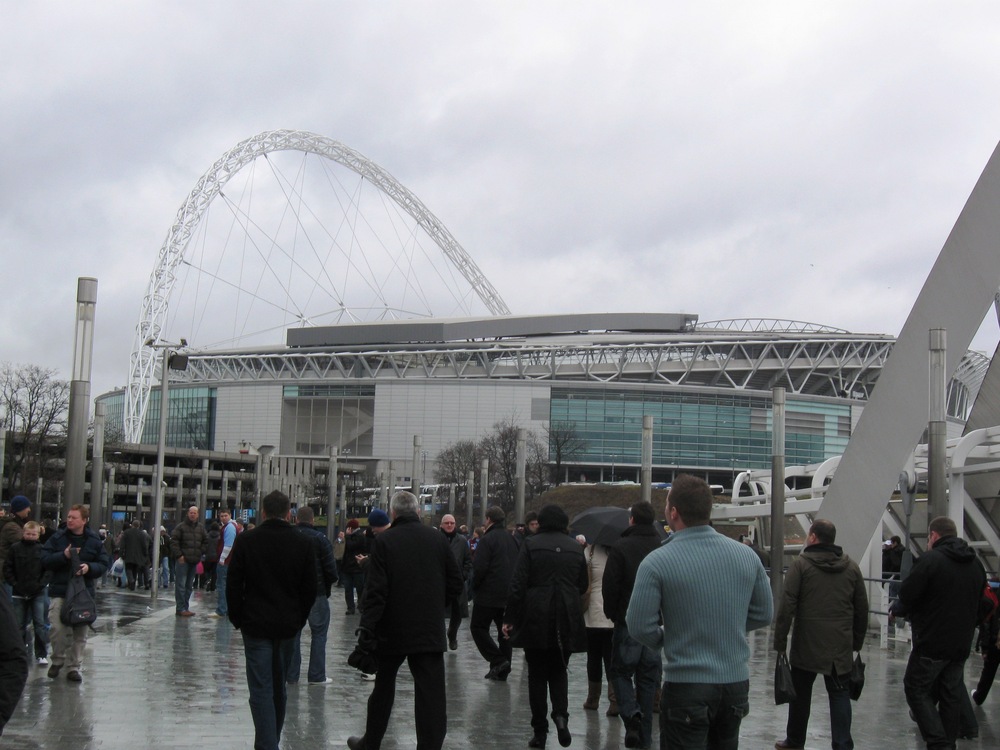 Not as cool as the Wembley Way entrance.

I circled the entire stadium expecting to hear someone offering tickets. Alas, nothing. Started to panic a little. Soothed by this: 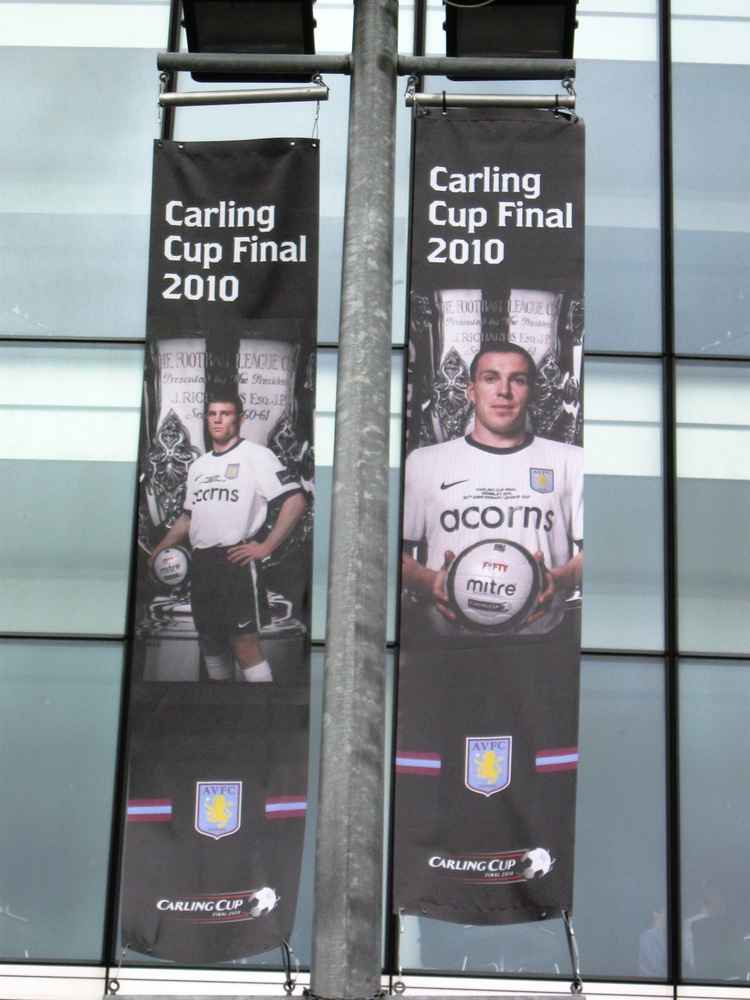 Sexy or terrifying? You decide.

Walked up and down Wembley Way seeking a ticket. For less than 400 pounds. Not in the Manchester United end. This was more difficult than it sounds. I finally made a friend and together we followed a ticket seller up and down the way until he finally managed to procure two seats in Club Wembley. For 500 pounds total. Due to the fact that ATMs wouldn't give me more than 200 pounds, I am currently in debt to another Villan. I feel horrible. 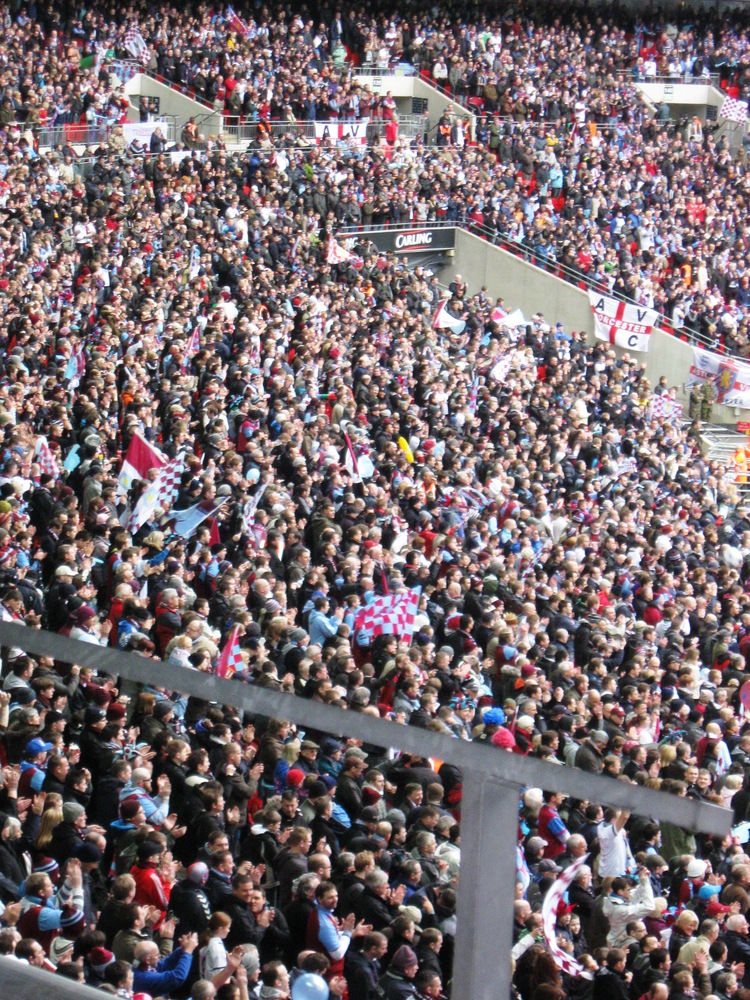 The Villa faithful in the West End

At first we thought we were going to have to be neutral in Club Wembley--after all, the tickets say no club shirts. Considering I was sporting my Villa scarf over my Villa windbreaker which was not keeping me warm over my short sleeved Gabby shirt, I was slightly displeased. I threw on the extra Sounders shirt in my bag and commenced looking like an idiot when nearly everyone surrounding us was adorned in claret and blue. Yeah, I took off the Sounders shirt. 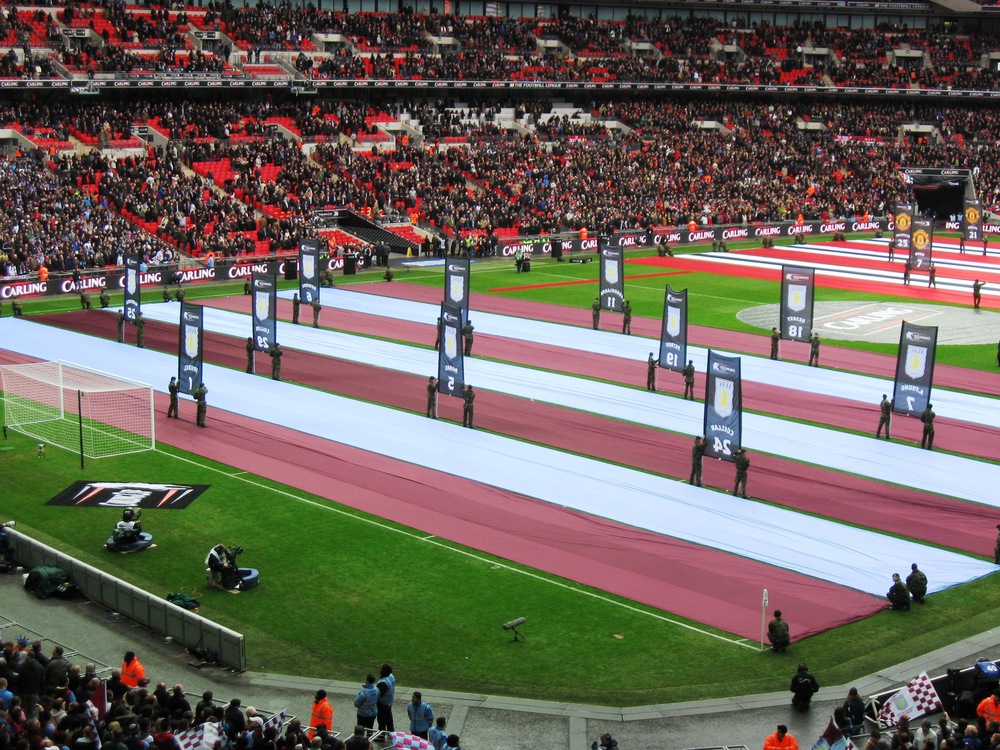 I'm not sure I really have the words to explain my time inside that stadium. For me, watching Villa usually involves going to the pub with one other fan if I'm lucky, or finding a live stream, or following live text if it's a work day. I can commiserate with others via twitter, but that's about all. Suddenly there were about 50,000 others gasping, screaming, applauding and groaning at the same time as I. And they were there! They were right there! 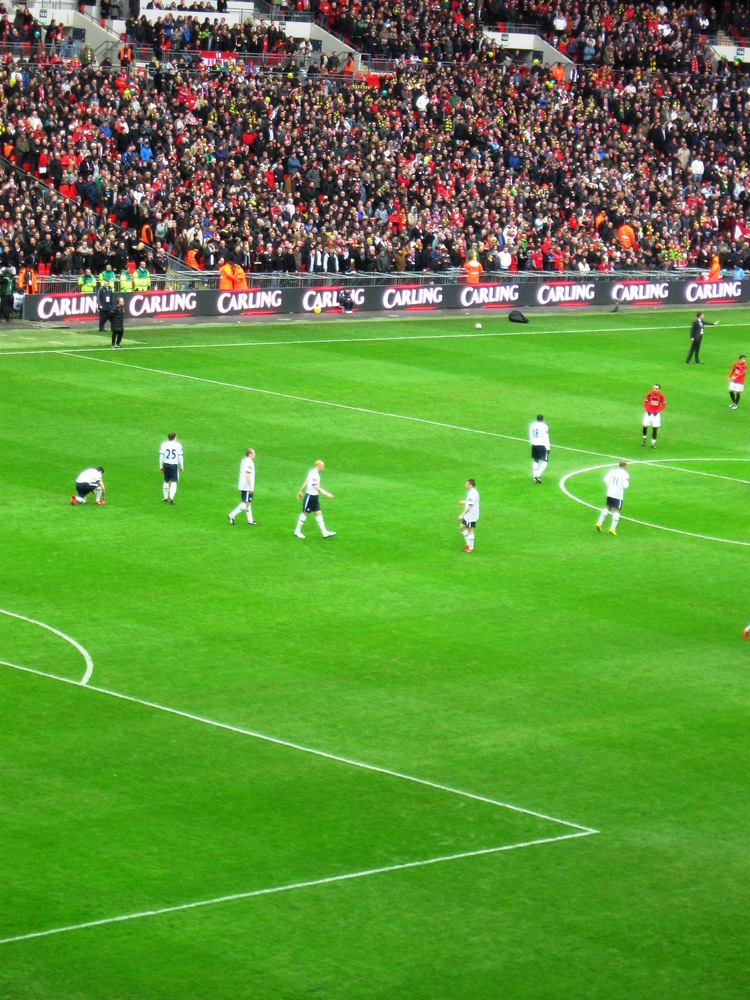 The closest I've ever come to a game like this were my Seattle v Houston playoff games--one for the Open Cup, one for the MLS Cup. Neither were a cup final and neither came close to the spectacle and ceremony surrounding the League Cup. Of course, the more important the game, the higher the joy...and the lower the sadness.

This game has been dissected in countless blogs and articles. If you're reading this, it's likely you wouldn't mind meeting Phil Dowd in a dark alley. I'm not going to go into cards or formations or the magic tailsman of United.

But I will tell you that, even from two levels up, it was evident that the Villans wanted to win this cup, and wanted it desperately. Not desperately enough to make poor challenges or perform sloppy footwork (which almost makes the loss worse, realizing how wonderfully we played) but they wanted it enough that I could see the pain on their faces. In the final few minutes, when we earned two corners in a row, every Villa supporter nearby was focused on Dunne and his massive head, convinced that he was going to knock that ball in.

And I wouldn't be surprised to learn that the muscle strain keeping him from this week's Ireland v Brasil friendly involves the muscles in his neck, because that man contorted himself into positions I'd never thought imaginable, trying his absolute best to give the fans what we so intensely wanted. When he missed, I could practically feel the agony radiating off him.

I don't say this to exalt my favorite Villan once again. Rather, it is to give just one example about how much the Villa want to prove themselves, to themselves, to the fans, and to their doubters. This team wants Champions League play. This team wants to return to Wembley for the FA Cup. And its supporters are right there with them, cheering them on even when they lose, reminding them we'll be back again very, very soon. 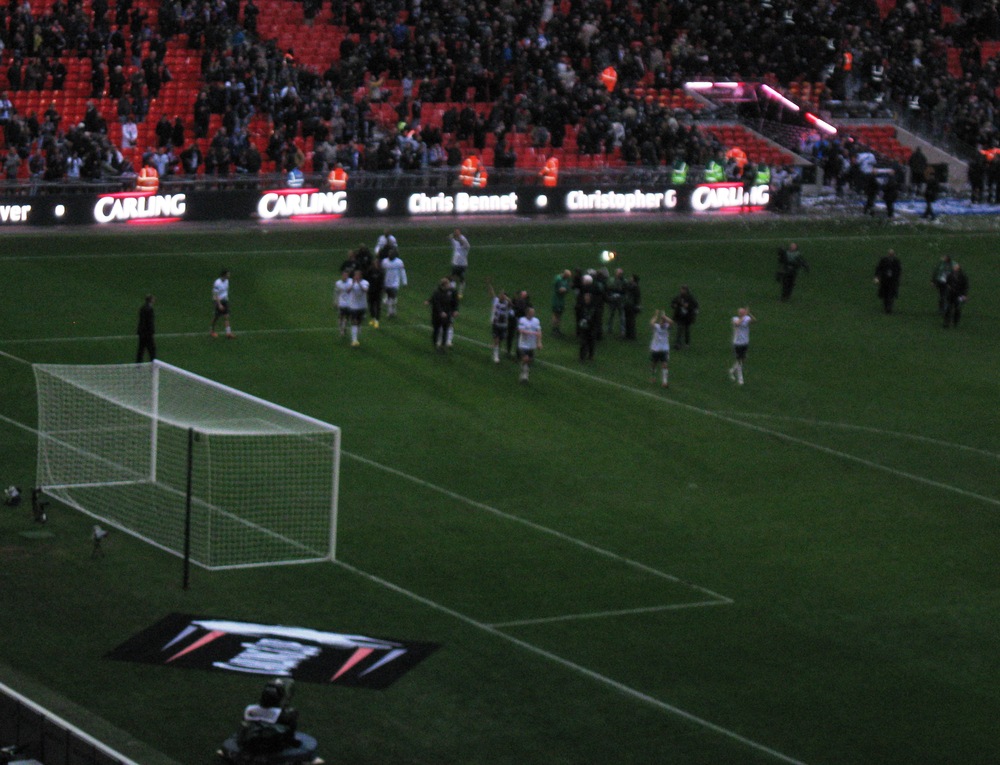 Even with a hurting heart, I walked away from Wembley still proudly wearing my Villa colors. Our team showed class, our team showed skill, our team gave us a reason to dream. Would I have liked a cup? Of course. But it's coming.

And now I know for sure--I am Villa til I die.